On a recent December Saturday, I hurried from the Metro train with my 6 year-old son trailing behind. We were joining friends and colleagues at the Justice for All March in Washington, DC. We had endured a dismal series of weeks in late November in which grand juries had refused to indict law enforcement for the killing of unarmed black men, and an African American domestic violence survivor had agreed to a plea agreement that included a return to prison after she’d already served 3 years for firing several warning shots to scare off her abusive husband.

I was eager to join the crowd, to put my hands up, and to engage in the healing of collective resistance. Not long after we arrived, I was confronted by a too-familiar problem when one of the speakers intoned, “have any of the black men here ever been stopped by law enforcement, and gotten nervous? Raise your hands. I know this may have happened to some of our white allies here today, too, but I am asking for a show of hands by black men.”

Then, the speaker moved on to something else, making no inquiries about whether the same was true for black women, or more generally, women of color, which I can assure you, based on personal experience and my non-scientific sample of the crowd, it is. My place in the struggle, in the resistance, had been erased. I attribute this feeling of “erasure,” not to this one remark, but to the fact that at no point in the march were the names of black women who have been murdered or harmed by the police mentioned.

If there’s one thing that defines the experience of black women in their encounters within the criminal justice context, it’s near invisibility. Both in conversation, and in engaging with law enforcement, we almost vanish. Black women are treated as if we have no rights that the law must respect. Moreover, the history of transgressions against us are trivialized or erased anew when #BlackLivesMatter becomes a recitation of black men murdered by law enforcement, and that leaves no room to talk about the women who have been killed and/or brutalized, sometimes by our partners, by law enforcement, or both.

Thus, history does not remember Dollree Mapp—after whom a very famous search and seizure case—Mapp v. Ohio—is named. When she snatched an alleged search warrant from the police and put it in her bra, a policeman, undaunted, retrieved it. At national rallies, we do not demand justice for Marissa Alexander, who was denied the use of Florida’s Stand Your Ground defense and convicted after firing a warning shot to protect herself from her estranged and abusive partner. And, we do not acknowledge CeCe McDonald, an African American trans woman, who defended herself after being subjected to racist, transphobic and physical abuse, but was jailed when one of her attackers died in the ensuing altercation.

The concern I raise is not merely academic. If you cannot see, acknowledge or name a problem, you cannot address it. Because our criminal justice system is awash in systemic racial bias, black women die at the hands of law enforcement just as men do—see the stories of Eleanor Bumpurs, Rekia Boyd and Aiyana Stanley-Jones. 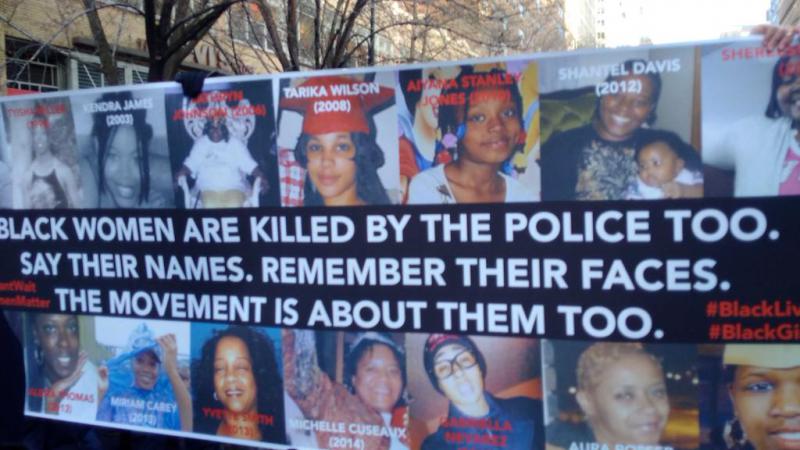 Moreover, there are a number of gender-specific ways in which women of color see harm at the hands of the criminal justice system, including physical and sexual assault perpetrated by law enforcement—note: the switch from “black women” to “women of color” acknowledges both their shared experiences and the need to name those burdened by this problem in order to fully eradicate it—including immigration detention. Women of color also suffer from domestic and sexual violence at astronomical rates, while at the same time fearing that their marginalized status—because they are of color, or trans, or may be undocumented—might make them vulnerable to law enforcement or put their partners at risk should they call 911.

Additionally, Native American and Alaska Native women experience intimate partner violence at higher rates while having a significantly lower expectation of response and protection from law enforcement and prosecutors. Women of color also are judged far too harshly by a system that shows them no mercy when they, or their children, are harmed by their intimate partners. And finally, all too frequently, we are confronted by the specter of law enforcement killing both men and women of color struggling with mental health issues when their families reach out to law enforcement for assistance.

How have women of color responded to the erasure of their experience(s) with law enforcement victimization by the movement, and in significant measure by the press?  (See also, this piece on the mothers of women slain by law enforcement). By grabbing the microphone and/or the pen. Fittingly, the response to this fundamentally intersectional problem has come from both racial justice advocates on the one hand, and domestic and sexual violence advocates on the other. As essential as it is to publicly respond to this kind of erasure, we must also acknowledge it as the microaggression that it is. Having multiple oppressed identities can increase the impact of the depression, anger and rage that such erasure often gives rise to.

Going forward, we need to work toward solutions that both include self-care, and care of others, and those that are systemic in nature.

Self-care begins with self-awareness, and taking stock of the impact of having been bombarded since summer by a ceaseless torrent of bad news of serious personal consequence. Managing that sense of dread or oppression, along with the daily stresses of life and the above-described microaggressions requires bringing to bear techniques to help center the mind, including meditation, and the mind-body, including yoga, other spiritual or religious practices, and regular exercise. Self-care can also include ways to process the experience, including writing about it, or talking about it with trusted people or with counselors, clergy or spiritual advisers. Care of self and others should always include being familiar with numbers and referrals for crisis lines (including, crisis intervention, domestic violence and sexual assault), and other community-based resources. Resources specific to women of color can be found here.

At the same time, impacted communities and allied individuals and organizations should continue mapping out plans for systemic change. These can take a variety of forms, including legislation, civil rights investigations, and multifaceted reform proposals.

Regarding legislation, in mid-December the U.S. Congress reauthorized the Death in Custody Reporting Act, which requires states to report the number of people killed in police custody or during an arrest. Having solid data as required by this law is a good first step toward assessing and responding to the problem of homicides committed by law enforcement. Along with civilian complaints, data can help highlight localities that should be prioritized for a variety of interventions, including civil rights investigations, which can bring about systemic reforms.

It’s also crucial to recall that although police violence is at the heart of the #BlackLivesMatter movement, the federal government can also initiate civil rights investigations into other state institutions for discrimination against people of color. When public schools discriminate against students of color, the result can be higher levels of suspensions or other sanctions. Thus, criminal justice system reform must be accompanied by continued scrutiny of the public education system, which has increasingly been responsible for pushing children of color into the “prison pipeline.”

As exemplified here, both law enforcement and education investigations have the potential to effect significant changes in the lives of our communities and our children. Yet another systemic initiative is underway in Missouri where the state attorney general is suing 13 St. Louis suburbs over their alleged use of traffic ticketing as a revenue-generating measure. Local residents have also suggested that such ticketing practices have a disproportionate impact on African American residents and that young Black men are pulled over at a higher rate than whites.

Finally, broad-based outlines or proposals for reform serve the dual purpose of identifying the scope of reforms that need to be undertaken, while giving communities and individuals some insight into what a reform process could look like. They also empower communities to advocate for one or more of the processes, while understanding that reform is indeed a marathon rather than a sprint.