Legal Momentum is calling on all employers, no matter how large or small, to adopt the “This Workplace Is a DV-Free Zone Bill of Rights” and put into place a policy that ensures that victims of domestic violence, sexual assault, dating violence, and stalking are safe at work. 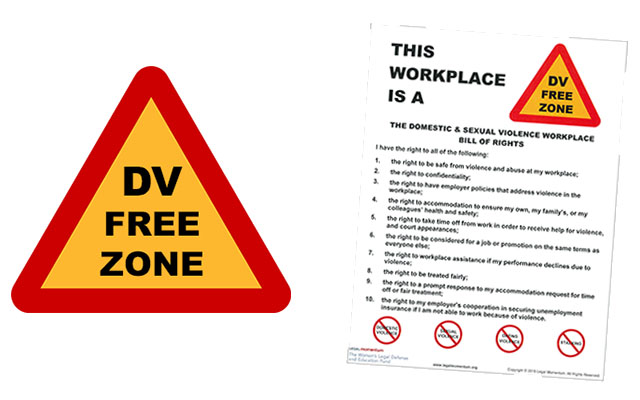 The statistics on domestic violence experienced in the workplace are appalling. For example, a 2009 study estimated that more than half of stalking victims were stalked on work premises, while nearly 33% of women killed in their workplaces from 2003-2008 were killed by an intimate partner. In 2007, nearly two in three (or 63%) of corporate executives acknowledge that domestic violence is a major problem in our society. Moreover, 55% of employers claim that domestic violence has a detrimental impact on employee productivity in their companies. Yet, a 2013 survey conducted by the Society for Human Resources Management showed that 65% of companies in the United States do not have a formal policy to address domestic violence at the workplace.

Even Minor Accommodations Are Wrongly Denied

Most victims of domestic violence, dating violence, sexual assault, and stalking are afraid to tell their employers about the violence in their lives. When they do, they are often denied minor accommodations (such as time off to go to court or to meet with law enforcement), even when the law mandates those accommodations.

For example, Erica (a domestic violence victim) contacted Legal Momentum when her employer refused to let her change her shift on only one day, so that she could comply with a Family Court order. Erica works for the City of New York. New York City law requires that employers make reasonable accommodations for victims of domestic violence. Yet, her City agency had no idea of the law, and would not let Erica switch shifts. Erica also had no idea that the law protected her.

With Legal Momentum’s help, Erica’s employer not only let her switch her shift, but also asked that she keep her employer informed about any changes in her circumstances.

Legal Momentum seeks your help in challenging all employers to put into place reasonable accommodations to allow victims of violence to stay at work, support their families, and maintain independence from their abusers. These reasonable accommodations include common-sense courtesies such as granting temporary flex time to allow victims to keep court dates, find safe housing, or to meet with law enforcement, lawyers, or doctors.

This October (Domestic Violence Awareness Month), Legal Momentum asks everyone to take a “selfie” with the “This Workplace is a DV-Free Zone” Bill of Rights sign and post it on Facebook, Twitter, and other social media channels using the hashtag #DVFreeZone. Ask your employers to post the “This Workplace Is a DV Free Zone” Bill of Rights prominently in workplaces. If your employers do not already have a domestic violence accommodation policy (and 65% don’t), ask them to adopt Legal Momentum’s Domestic Violence Model Policy.

Together, we can ensure that all victims and survivors of domestic violence, sexual assault, dating violence, and stalking are truly safe at work.