In an interview on July 12, Candice Jackson, the acting head of the Department of Education’s Office for Civil Rights (OCR), said that the overwhelming majority of Title IX complaints did not warrant investigation. She asserted that investigations were not “fairly balanced between the accusing victim and the accused student.” Instead, she believes that “90 percent” of accusations “fall into the category of ‘we were both drunk,’ ‘we broke up, and 6 months later I found myself under a Title IX investigation because she just decided that our last sleeping together was not quite right.’” To Ms. Jackson “the facts just don’t back up” accusations by female students.

These statements are outrageous and offensive. Moreover, they convey the same backward attitudes that often chill reporting by victims. Legal Momentum gets dozens of calls from survivors of campus sexual violence every year. We have yet to speak to a survivor who decided to file a complaint 6 months after the fact because something was “not quite right”—in fact, victims of sexual violence seldom have any doubts about the nonconsensual nature of their assaults. However, we have spoken with countless survivors of violence who are afraid to come forward to school officials and police because they are afraid that nobody will believe them. And who can blame them?

Ms. Jackson’s words are part of a wider effort to establish the OCR as a supposedly “neutral agency.” On July 11, Secretary of Education Betsy DeVos announced a reversal of the Obama administration’s rigorous policy of investigation, cloaking this as an attempt to process complaints more efficiently and clear “significant backlogs.” 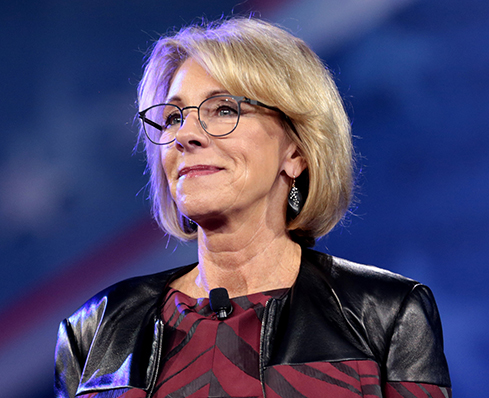 To those unfamiliar with Title IX procedures, DeVos’ intention to clear backlogs might seem positive—when President Obama left office, around 350 Title IX complaints against schools had yet to be resolved. Furthermore, according to the department the average length of a case takes 703 days. This backlog, due in part to severe understaffing at the OCR, was clearly problematic. Legal Momentum has urged greater resources for OCR to enable faster handling of complaints. Importantly, the Obama administration’s approach acknowledged the systemic presence of assault on campus. During these investigations, universities were required to hand over 3 years of information on how they handled previous cases.

This systemic approach changed the landscape for many victims and spurred wider policy changes. As of late 2016, 65 percent of OCR’s Title IX investigations had resulted in resolution agreements that outlined changes to policies and procedures and specified monitoring periods. For example, an investigation into the University of Virginia led to legislation requiring all colleges in the state to have sexual assault response teams, to regularly conduct climate surveys, and to develop a grant program to support research on preventing gender-based-violence. In 2014, following OCR’s release of a resolution based on its Title IX investigation into the State University of New York system (SUNY), Legal Momentum led the charge to pass “Enough is Enough,” the nation’s strongest state law combating sexual assault on college campuses. Signed into law by Governor Cuomo in July 2015, it requires all colleges in New York State to adopt a set of comprehensive guidelines and a standard definition of affirmative consent, and mandates a statewide amnesty policy. It also expanded access for law enforcement and set aside $4 billion for educational and enforcement programs.

Unfortunately, DeVos and Jackson’s words foreshadow an approach to cases that would change the degree of federal pressure on universities. However, it is naive and dangerous to approach sexual violence on campus on a case-by-case basis. Evidence shows that 1 in 5 college women are assaulted, serial rapists commit 9 in 10 campus sexual assaults, and that only 3 out of every 100 rapists will ever spend a day in prison.

The new Department of Education is failing victims at the first hurdle. They do not acknowledge the ugly truth that American universities systematically do not provide services and support to victims. However, they should do more than just acknowledge the problem—they must address it. It’s simple: for victims of sexual violence, justice delayed is justice denied.

If you are a survivor of campus sexual assault and have questions about your rights, we encourage you to reach out to us at 212-925-6635 ext. 650, or email us at peo@legalmomentum.org. You can also download our Know Your Rights fact sheet "Surviving Campus Sexual Assault: An Overview of Your Rights as a Student." The fact sheet is also available in Spanish and Chinese.

Fiona Singer is a summer intern at Legal Momentum. She is a rising sophomore at Georgetown University studying International Affairs. She hopes to go into public policy work.