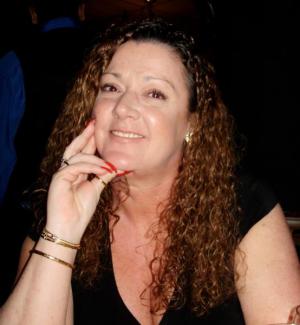 “I didn’t sign up to quit, and I certainly didn’t sign up to fail,” says Sarah Coyne the Executive Assistant Director of the International Union of Painters and Allied Trades Finishing Trades Institute in Maryland. Sarah has more than 19 years of industry experience as a painter, trainer, and leader. She says, “I didn’t have to be a painter; I chose to be a painter,” and Sarah has stuck by this choice for more than 19 years. Her tenacious commitment to her trade, along with the support of dedicated mentors along the way, has allowed her to have the career she has and loves today and be an inspirational leader for the next generation of tradeswomen.

Sarah joined Local 741 in Martinez, California in 1995. She joined her local union because she saw an opportunity to be self-sufficient and independent and build a career for herself, while also being a part of a community and a member of a great organization. Quickly, Sarah was seen as a dedicated, focused worker who actively pursued opportunities to build additional skills and become a leader. “This is an incredible organization that provides opportunities to grow not only on the jobsite, but also at the local union, district council, and at the International level,” says Sarah.

These opportunities included a full time painting instructor for DC16 apprenticeship program as well as receiving educational scholarships she utilized to earn both her AAS and BA Degrees.   She also sought out additional responsibilities, becoming as the recording secretary for her local union and delegate to her district council.

Her hard work and skills were noticed in 2006 when the International Union of Painters and Allied Trades opened the Finishing Trades Institute (FTI) in Maryland, and Sarah was offered the position as the Health and Safety Director/Institute Coordinator. Not long after, she transitioned to her current role as the Executive Assistant Director. Sarah’s quick ascension to leadership was made possible by what she calls her drive to succeed and recognition of her commitment to the trade. “It’s about showing up, giving an honest day’s work to your employer, and getting involved in your local union “says Sarah. “I believe we all should give back to our union what it has given us.  It is easy if you believe in it.”  While Sarah’s dedication and skills were valued, she is quick to say that she had the support of several mentors. “I have been blessed with the mentors I have had,” says Sarah. She not only names trades persons who supported her early in her career, like her local union business representative, Elmer Kennessey, fellow union members David Gatti, Prince Lewis and Jeff Jones, but also leaders like Dan Thomas, president of FD Thomas, a national coating and specialty contractor and, IUPAT General President Kenneth E. Rigmaiden, FTI Director Daniel Penski and FTI Co-Chairman Terry Webb, owner of Eureka Glass. “I have never had a woman mentor. They just weren’t available when I joined,” says Sarah. “Yet, these men looked beyond gender and provided opportunities based on my qualifications, degrees, skillset, and dedication, which is the way it should be.” Sarah encourages all tradeswomen to seek mentors and support. Noting that some women might feel more comfortable with a female mentor, she urges them to look instead at the intentions of the person, not the gender. “Male or female, it is tough on the job site. Support is vital.”

Sarah attends the annual Women Building California and the Nation conference each year with one of her mentees, Wendy Burrows, who was her apprentice over 15 years ago and today is a successful journey worker in Sacramento, CA.  Sarah believes that the conference gives tradeswomen the opportunity to network, unite, and learn from seasoned tradeswomen who lead by example. “It’s not nontraditional work when you’ve been doing it for 20 plus years,” says Sarah. She says that the leadership of these women, and the increased attendance and support at the conference from the top leaders of several building trades unions like General President Rigmaiden, point to increased opportunities for the next generation of tradeswomen.  Sarah’s advice to women in the trades, whether new or established in the industry, is to surround yourself with quality mentors and be open-minded to their suggestions for personal and professional success.