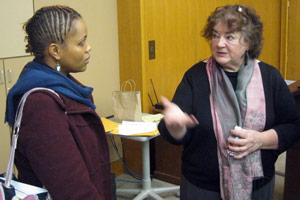 “I don’t want to be like Rosie the Riveter,” says Meg Vasey, a retired electrician and Executive Director of Tradeswomen, Inc. Since putting away her tools after a 25-year career as an electrician, Meg has graduated from top-ranked U.C. Berkeley School of Law and worked for over a decade to build a more inclusive construction industry. “I don’t want there to be stories about us, followed by a 30-year break before more women are in this field.”

“Women’s participation has shrunk, and we’re in danger of losing any kind of critical mass,” says Meg of women’s participation in construction trades and occupations. Over her 35-year career, Meg has seen women become 10% of the occupations during the 1980s, only to drop back to just 2-3% now. Noting that women participate in other dangerous and dirty jobs at far higher rates than the trades, Meg can’t help but sound a bit frustrated. “I know it’s hard to compare, but they’re not as well paid and don’t have the same career trajectory as the trades.” Nationwide, women are up to 15% of police forces, 7.5% of the fire services, and 11% of the Marines. “Women do well in those jobs and want to do them. In these fields, the employers have found a way to overcome discrimination, and I just wait for construction to do the same.”

As much as Meg knows that it is important to get women into the industry, she is concerned that they are not thriving once they get the job. “Discrimination is endemic in the construction industry,” she says. Meg receives phone calls from women in the Bay Area and across the nation who are experiencing discrimination and harassment at work. Meg says that these women face a difficult decision: although the issues they confront are tough, suing their employer can ruin their reputation and career. That’s why she says that changing the culture must start at the top. “I’ve heard company managers or supervisors say they have no control over the guys, but the tone that they set ripples through the site. You have to put out that message to the union and contractor. ‘If you value women as a part of your workforce, you will be rewarded and the rank and file will be more productive.’”

Another part of thriving is having a strong network of support, which Meg fosters as an organizer of the annual Women Building California and the Nation conference. At this event, more than 600 women in the trades from throughout the U.S. assemble in Sacramento. “We bring young women in pre-apprentice programs to meet others and not feel as isolated as they may feel when they’re on the job or in their programs where they may be only 1 or 2 of 40 participants.”

Working on the conference and on the National Taskforce for Tradeswomen’s Issues (which Legal Momentum co-chairs), Meg collaborates with other tradeswomen organizations, policy leaders, and advocacy groups. “I enjoy working with these groups because they understand the details of this work, how the crafts work together, and the nature of the construction industry.” Together, these organizations are working to create a more inclusive industry by fighting for stronger federal policies, like protecting funding for apprenticeship programs, improving compliance enforcement, and preventing cuts to the Department of Labor Women’s Bureau. “I was given a chance because contractors were told that they needed to find women. I never worked any federal projects, but it got my foot in the door. I want other women to have that chance.”

Tradeswomen’s Tuesday is a campaign to bring visibility to the nearly 200,000 women who are building our nation and breaking down barriers in construction trades. These women love what they do and want more women like them to enter their trades. Legal Momentum’s Equality Works project works with women like Meg to ensure that they will not have to face obstacles every day on the job. For more information on women in the trades, see Legal Momentum’s 2013 Report, “Still Excluded.”

If you're a tradeswoman who is interested in being featured in this series, contact Françoise Jacobsohn, Equality Works Project Manager, at equalityworks@legalmomentum.org.