“Being in the trades raised my own confidence, self-esteem, drive, and desire for success. I have the skills, tools, and capabilities to do the things I want to do,” says Janet Dukic an Ironworker in Chicago with 11 years of experience in the trades. Before becoming an ironworker, Janet was an implementation programmer for a bank. Working at the bank made her happy, but she knew she wanted more from her career. So Janet took some time to soul search about what she wanted in her dream job.  While searching, she met someone who suggested that she would make a good ironworker.

Janet followed that advice, and within her first week on the job knew ironworking was for her, “It aligned with every interest I had in a dream job. I feel at home in my job and in the trades.” Being an ironworker gave Janet the ability to wake up early, be home in time to see her kids in the afternoon, remain physically fit, work outside, and afford to go back to school so she could continue her education—everything she wanted in her search for a dream job. When asked what skills make her successful, Janet said, “It’s not one skill that makes me successful. It’s a versatile bucket of tools that makes me successful. But, I don’t hoard my tools. I share them with people. I teach and empower other people in the process.” Janet empowers other people through things she learns as she continues her education with the help of her union. Janet studied three years at DePaul University, receiving a Certificate in Labor Leadership/Labor Law, and will graduate in September from ITT Technical Institute with a Bachelor of Science in Project Management. She also has an associate’s degree from the ITT Technical Institute in Drafting and Design. She credits joining the trade with the ability to continue her education and the motivation to never stop learning. 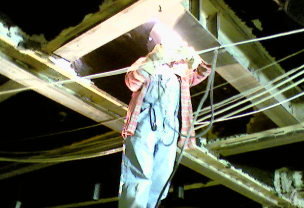 In the process of continuing her education, Janet has found her inspiration and what she terms her "civic duty." She was asked in class to write a paper about sexual harassment with regards to tradeswomen and in the process became inspired by women like Amelia Earhart, Florence Nightingale, and pioneering tradeswomen, Jan Jenson (one of the first women ironworkers) and Sue Doro (retired machinist and Author of Pride and a Paycheck). These women’s stories inspired her to write her paper as a letter to her daughter, in which she exhorts her to, “Never quit. If you want to work in non-traditional work, acquire the skills and don’t think that you can’t do it.”

Janet feels it is her civic duty to share the stories of tradeswomen or other inspirational women as she comes across them. She remarked that, “There will be a daughter that comes along and will read about us. They need to know that it is our movement and their movement that will keep us here. We are here.” She realized this by meeting people and reading about women who have gone on before her, saying that, “The lessons people teach while they are alive are valuable. We need to hear them. We need to learn from them.” Janet encourages women across the nation to network with each other in order to bond, learn from each other, and share the stories that inspire her to continue in the trades and that she believes will inspire the next generation of tradeswomen too.