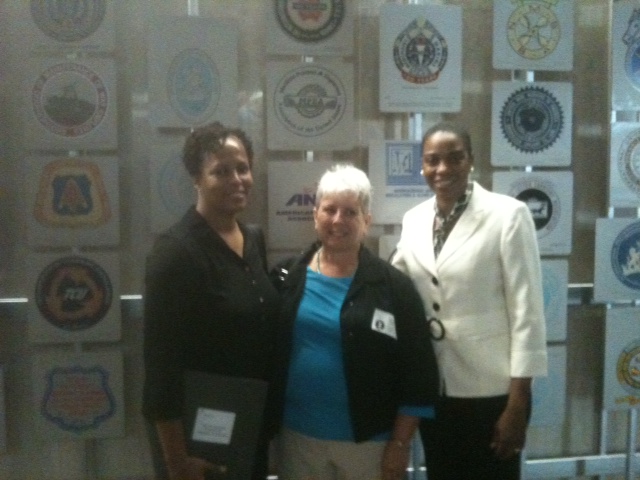 “I like seeing people’s lives change as they develop the skills to be crafts people,” says Leah Rambo, training director for Sheet Metal Workers Local 28 in New York. A sheet metal worker with 26 years of experience, Leah uses her talent as an educator and her passion for her trade to develop the next generation of tradespeople. Her energy and dedication has helped to attract an increasing number of women to the trade, and her current class of 406 students has 35 women students, making up 9.4% of the class. This is far above the national average of 2.5% women in construction trades apprenticeships.

As a student at Brooklyn Technical High School, one of the nation’s most selective high schools for engineering, math and science, Leah planned to become an mechanical engineer. However, an internship as an electrician’s assistant during her senior year changed her mind. She enjoyed the work and looked into opportunities with the electricians union, but it did not have any openings. A teacher recommended that she consider sheet metal work, and Leah discovered that it was a natural fit. “I love my trade because it’s probably the most versatile of the trades. We start with a flat piece of metal and make it into something that can move air,” says Leah, with a detectable tone of excitement. She immediately enjoyed that the trade combined physical and mechanical work while also requiring top-notch knowledge of design and drafting.

Learning the skills of the trade, however, fit less naturally. “The apprenticeship was a culture shock,” says Leah. “I wasn’t used to working in an all-male environment.” A born tinkerer, Leah had always been the child who takes things apart, in order to put them back together. Her parents had always supported this trait, even giving her a toolkit at age ten, never giving her the impression that her passion was unusual. Leah had to seek out mentors and teachers who would support her. “I can be a pest and am tenacious, so I made sure that I learned,” says Leah of her unstoppable commitment to developing as a crafts person.

Leah was equally determined to end issues of harassment. In her first year as an apprentice, she was sent to get coffee. While she was out, the carpenters’ shop steward, someone she had met only in passing, grabbed her and kissed her. When she reported the incident to her company, his company, her union, and the general contractor, he was ordered to stay away from her, but faced no other consequences. Undeterred, he would occasionally lurk near her workspace. One time, she was alone in a ceiling, and he approached her ladder. She says, “I had my hammer with me, so I dropped it, not really at him, but just missing him, and told him if he came near me again, I wouldn’t miss.” Her willingness to stand up for herself kept him away.

Leah points out that this incident happened 25 years ago. Although there are still many challenges for women, harassment like this has become extremely rare for her. She also says that many of the other factors that contributed to the negative culture have changed. “There’s less pornography on site these days, and people aren’t drinking and doing drugs on the job the way they used to,” says Leah, describing how times have changed. As an instructor and now as training director (the first woman in her local to be named to these positions), she advises her female students to learn to be assertive and speak up for themselves. “There’s a delicate balance between being professional and assertive and being called a b---- because the guys’ feelings get hurt easily.” However, she adds, skilled tradeswomen who do their work well and are reliable often rise above the nonsense.

Since becoming an instructor in 1998, Leah has seen what it takes for women to succeed in the trades. Looking back at her apprentices over the years, she says that her women students succeed at a slightly better rate than the men. “Women have usually thought harder about what to expect from the trade. We have the fight in us…and the hand skills.”