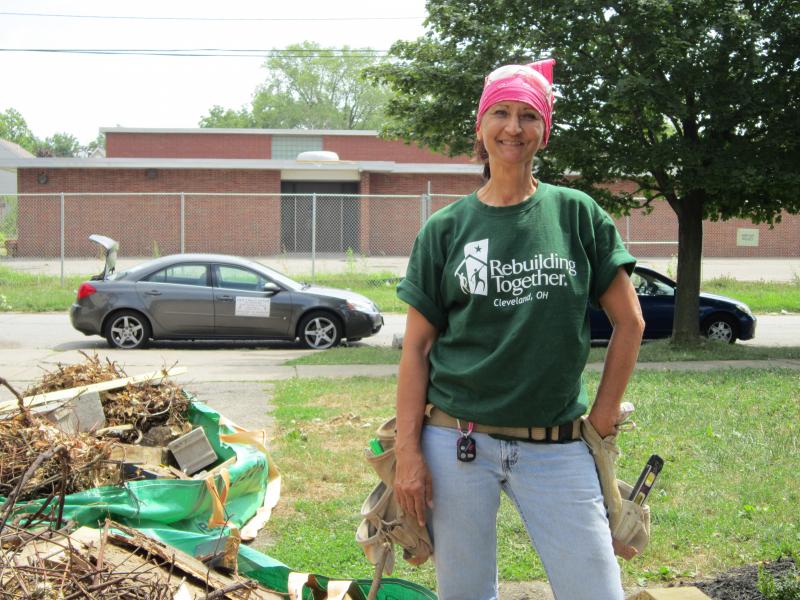 “I enjoy a challenge,” says Rocky Hwasta, a retired carpenter from Cleveland, Ohio. During her 30-year career, Rocky was challenged physically by her work, and mentally by unwelcoming colleagues. Now that she has retired, she has set her eyes on a new challenge: helping more women succeed as tradeswomen.

When Rocky started a pre-apprenticeship program in 1985, she was a single mother with three young children. Although she had a bachelor’s degree from Ohio State, her job as a counselor paid only $7 an hour and did not provide benefits. When she began searching for better paying opportunities, someone mentioned to her that there as an upcoming test for the carpenters’ union. Of the 250 applicants, only the top twenty-five scorers would be admitted to the program. Rocky earned the top score, securing not only a position in the program, but also a better life for her and her family.

Although her position in the program was well-earned, Rocky was not able to rest on her laurels. “The guys weren’t exactly welcoming,“ she says. Rocky managed to win over some of her colleagues by demonstrating a stellar work ethic. “You’re always being watched, so you need to show them you can do the work,” says Rocky. She proved herself by learning to read blueprints, doing side work, and taking classes. When she would occasionally encounter a helpful male colleague, they did not always have the most professional of intentions. Rocky describes how some of the men were genuinely concerned for her safety, but others tried to use their “help” as an opportunity to try to date her. “That was a fruitless endeavor for them,” says Rocky with a chuckle.

Rocky’s hard work paid off, allowing her the opportunity to work on a variety of projects over her 30-year career, including big projects like bridges and commercial construction and smaller ones like residential decks. “I have a lot of pride in what I do. Working for this many years, you have to have good mechanical skills, something that not every woman or man has.” Rocky’s skills and tenacity helped her work her way to leadership positions, both in management, as a foreman, and as president of her local. “I was really proud of becoming a foreman,” says Rocky. “It’s great when a contractor sees that you’re smart, efficient, and can motivate others. “

Now that she is retired, Rocky uses her ability to motivate others to bring more women into the trade. She speaks at schools and job corps programs, helping to inspire the next generation. Her advice to aspiring tradeswomen: “Get union-trained for the skills, wages, and benefits, and get a mentor.” A mentor, Rocky says, can not only help tradeswomen develop strong mechanics, but mentors can also help women navigate the other challenges of the job, like saving to prepare for inevitable layoffs.  She also advises women to attend the Women Building California and the Nation conference. The conference, she says, “gives you such a great feeling that you’re not alone and that there are more women going through the same things as you. “ (The Women Building California and the Nation conference is happening this weekend.)