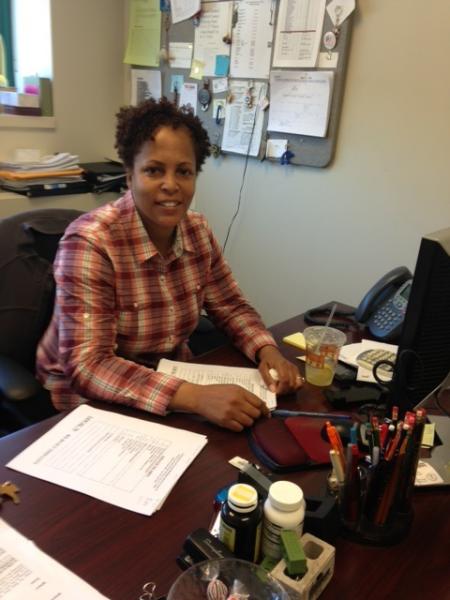 “I’m their lifeline,” says Wendy Webb, of her current role as Apprentice Program Field Director for the Construction and General Building Laborers’ Local 79. This role takes Wendy out into the field to talk to apprentices as they learn the ropes on their job sites on the road to success.

Wendy was working as a fire warden at a Sheraton Hotel after her military service when she learned about the trade. The hotel was renovating, and as Wendy made her rounds the construction workers would flirt with her. Eventually, she said “I’m not interested in dating you, but I would like your paycheck.” Soon after, she was hired directly by a contractor and joined the union. Wendy enjoyed the job, saying “The days go by really fast, and I always expected to do something different every day.”

Working alongside male colleagues was similarly predictable. “The guys were like guys,” says Wendy of her co-workers. “But, I grew up with brothers and was in the military so I have a thick skin.” Her tough disposition kept a lot of trouble away, but not all. On one of her first jobs, a deputy foreman approached her while she was working. When he touched her inappropriately, she hit him with the shovel she was working with. “That stopped that,” says Wendy.

“In the last 10 to 12 years, a lot of the harassment is not in your face,” says Wendy. She says that after hours of training and several high-profile lawsuits, most tradesmen know better. Even with changing times, Wendy says that the women apprentices with whom she works still sense that during the first few days on a job, the men make it clear that women are unwelcome. “’I’m going to deal with stuff for the first two weeks, so I have to get through it,’” says Wendy, describing the mindset of the apprentices. She says that the women find that if they show up on time, shake hands with the men, and make it clear that the woman is there to learn, they earn the respect of their colleagues.

Over her 26-year career as a Laborer, Wendy has had several roles. After spending 13 years in the field, she was a Business Agent for over a year, the first female business agent in New York City, before working as the Apprenticeship Coordinator for 11 years.  She says her current job is her favorite because she gets to help the apprentices shape their careers. For women apprentices especially, Wendy is an important source of guidance and support. “This career is not for everyone – men and women – you need tough skin, you’re on your feet all day, and you’re putting your body through stress. But if you want the opportunity and commit to it, it can be a great opportunity.”