2022 Year in Review: Letter from Our President

In 2022, Legal Momentum (LM) continued to be at the forefront of the unceasing and often controversial battle for gender equality. BECAUSE OF  YOU, we continued to advance our mission to ensure economic and personal security for all women and girls by advancing equity in education, the workplace, the courts, and at home. However, with the reversal of Roe v. Wade, and persistent rates of gender-based violence, WE STILL HAVE WORK TO DO. Fortunately, our Reproductive Justice, Workplace Equality and Economic Empowerment, Equal Educational Opportunities, Violence Against Women and Girls, and Fairness in the Courts pillars make us fully equipped to take a multigenerational, intersectional and long-range approach to our shared future.

Here are some highlights of the impact we made in 2022 and what we hope for this year:

Passage of Salary Transparency Laws in NYC and NYS: This year, LM successfully led a collaborative initiative to enact groundbreaking pay transparency legislation in New York City and State. These bills, which have influenced similar legislation across the country, are changing the national landscape, ushering in an important shift towards pay equity for women and people of color.

Violence Against Women Reauthorization Act of 2022: After 6 years of relentless advocacy at which LM remained at the forefront, VAWA was finally reauthorized and signed into law, making critically needed enhancements and investments to serve the true needs of all survivors of domestic violence, sexual assault, dating violence and stalking.

As Part of our Reproductive Justice Efforts, LM launched a new Reproductive Rights Resources page on our website and we published our newest resource, Drug Testing Pregnant Patients: What You Need to Know. This resource provides pregnant people with baseline information about the harms and potential consequences of nonconsensual drug testing, their rights as a pregnant person seeking healthcare, and ways to take action if they have been subjected to this practice.

A Guide to Defamation for Survivors of Sexual Assault or Harassment: In response to the rise in retaliatory defamation lawsuits against survivors for speaking up, LM has equipped survivors with information about their rights through our new guide and supported survivors by filing amicus, or “friend of the court,” briefs in important cases including Gottwald v. Sebert (a.k.a. Kesha) (New York) and Khan v. Yale University et al. (Connecticut).

In Khan v. Yale University et al., the Connecticut Supreme Court will answer a critically important question related to whether statements by a victim of sexual violence during the course of campus Title IX proceedings are immune from defamation. Given the dramatic rise in defamation lawsuits against survivors for speaking out and seeking accountability, this decision could have wide-ranging impact.

Bipartisan Safer Communities Act (BSCA)— Partially Closing the “Boyfriend Loophole”: LM led BSCA advocacy in coalition with a handful of organizations and met with senators and house representatives. Congress passed and President Biden signed into law the Bipartisan Safer Communities Act which includes provisions that partially close the “boyfriend loophole” by not allowing abusers convicted of domestic violence to possess or receive firearms. Previously, the domestic violence firearm prohibition only applied to adjudicated abusers who were currently/formerly married to, cohabitating with, or had a child in common with the victim. The dating violence provisions included in the Bipartisan Safer Communities Act will save lives. Yet there still remain gaps, including that dating partners subject to final protective orders are not covered.

Advocacy for Inclusive Gender Equality: 2022 saw numerous threats to the rights and dignity of the LGBTQ community. LM joined robust advocacy to challenge laws seeking to restrict athletic opportunity to transgender girls and to advance laws and caselaw that solidify the view that laws protecting against sex discrimination include protections on the basis of sexual orientation and gender identity.

LM’s Working Woman’s Bill of Rights was updated and remains a resource critical to advocating for more robust protections for working women.

Rights Now! Program: We concluded our sixth successful iteration of the program, bringing our total to 49 youth leaders equipped to impact gender equality in their communities. 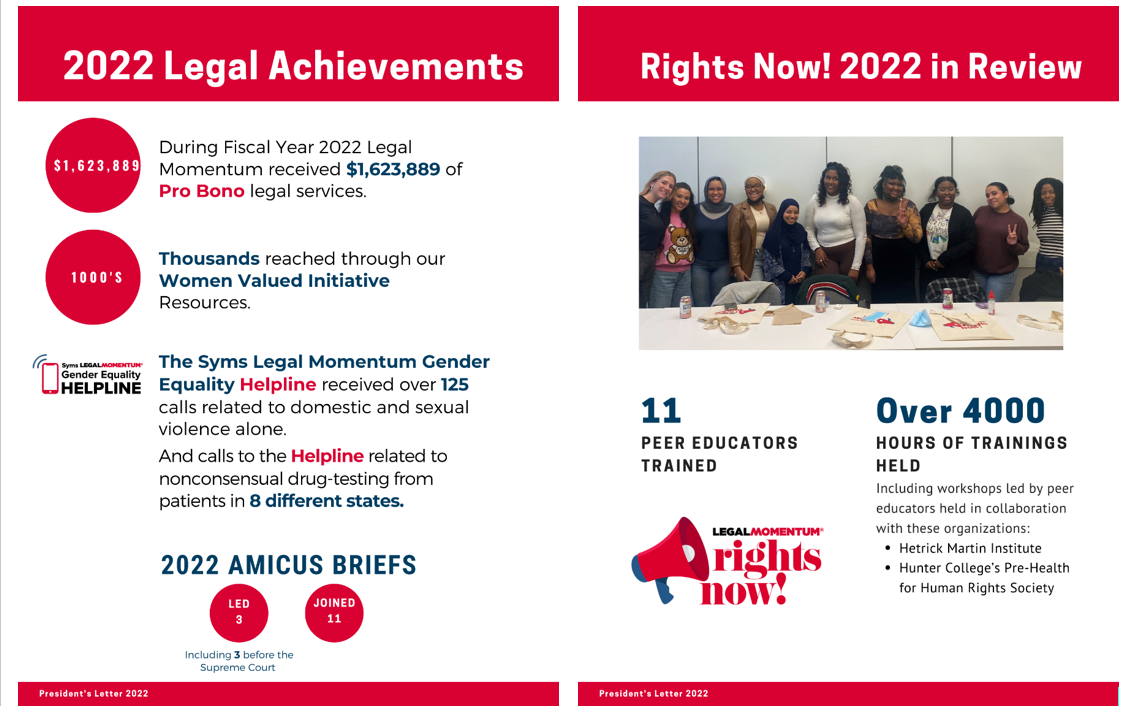 Protecting Reproductive Freedom: Performing nonconsensual drug tests of pregnant patients is a gateway for governmental intrusion into the lives and bodily autonomy of pregnant women and their families. This practice is happening in states across the political spectrum with little light shed on it. In 2023, we will expand this work into other states, representing more affected women and educating as many people as we can reach.

Advancing Economic Security for the Most Vulnerable Women: In 2023, we will strengthen and enforce existing pay transparency laws, support similar legislation across the country, and advocate for broader protections for women in low-wage work, including increases to the minimum wage to index minimum wage to inflation.  We will build upon our critical educational tools to educate more women about their rights. To help with these initiatives, Deputy Legal Director Seher Khawaja was appointed as a new Commissioner to the New York City Commission on Gender Equity.

Violence Against Women – Enhancing Protections for Survivors in the Workplace: Survivors of gender-based violence often see their employment impacted and financial security is essential to maintaining safety. Few states have robust protections that ensure survivors have leave to address the abuse and job protection. In 2023, we will continue a campaign to educate more survivors about their rights and expand protections in more states.

Equal Access to Education: Title IX’s promise of an education free from sex discrimination will only be fully realized by regulations and laws that hold it to that promise. We will continue our legislative and administrative advocacy and our impact litigation to ensure that in 2023 Title IX is implemented in a way that reflects all we have learned in the past 50 years and addresses the harmful gaps that persist.

Empowering Youth Leaders: Our 2023 Rights Now! program will focus on building capacity of our youth leaders to get involved in policy advocacy and be civil leaders for gender equality.

Legal Momentum is proud to report the strong support of our donors and our continued efficient use of this support. See LM’s 2022-06 Audited Financial Statements.

With your continued partnership and support, Legal Momentum is committed to doing what we have done so well – advancing the economic and physical security of women and girls, developing groundbreaking legal strategies that bring about dramatic and lasting change in law and policy, maintaining our unwavering commitment to gender equity, and honoring the inextricable links to racial justice, thus achieving equality for all.

Thank you for standing with LM in 2022. Together we can achieve even greater impact this year and beyond.

We’d love to hear from you!