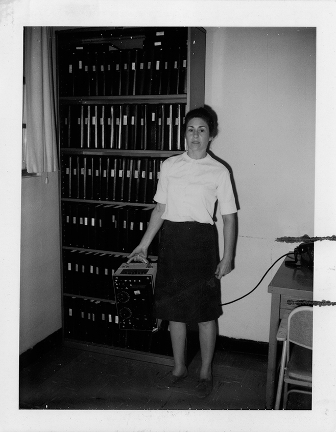 As we reflect on our 50th year of unwavering championship of gender equality, we’d like to share with you a case that is the origin story of our organization.

In our early years, female attorneys were far and few between. One of the original founders of NOW and our organization, attorney Marguerite Rawait - organized a network of her peers in the field, many of whom joined NOW’s Legal Committee. Although these women just operated as a loose coalition, this did not prevent them from successfully challenging sexist policies of major institutions.

In 1967, these women attorneys including Sylvia Roberts – later our second president - closely tracked sex discrimination lawsuits around the country, watching each of them fail in lower courts. “Protective” labor legislation - state laws which claimed to shelter women from physically or mentally taxing work - remained prevalent despite the 1964 passage of Title VII, the equal employment section of the Civil Rights Act. It was the legal battle in defense of Lorena Weeks, a victim of these discriminatory laws, which marked the beginnings of our trailblazing work advancing and protecting women’s workplace legal rights.

Lorena Weeks was an employee of Southern Bell Telephone Company, where she had worked as an operator for several years. When Weeks applied for a higher paying job as a switchman she was denied the opportunity on the grounds that the position was reserved for male applicants only. To defend their exclusion of women from better-waged positions, the company cited a Georgia state rule that women employees could not be asked to lift any object more than thirty pounds. Weeks took legal action against Southern Bell, but lost.

Sylvia Roberts and her fellow female attorneys saw Weeks’ case as an opportunity to change the life of not just one woman but all those who suffered at the hands of discriminatory employment practices. The beginnings of our half-century of strategic leveraged action.  On behalf of the NOW Legal Committee, Roberts took on Weeks’ case pro bono and appealed it to the Fifth Circuit Court of Appeals in 1969. Roberts argued that the Georgia law against women employees lifting heavy objects was unfounded, as many women were regularly tasked with lifting children over thirty pounds in their homes. Sylvia Roberts and Lorena Weeks were successful in their appeal, granting Weeks justice and paving the way for future legal and legislative victories for women in the workplace.

In response to their hard-fought victory, the female attorneys of NOW’s Legal Committee recognized that their success was only one step in a long road ahead.  They formed a permanent institution, the NOW Legal Defense and Education Fund with Faith Seidenberg as our first president on March 16, 1970 – renamed Legal Momentum in 2004.

What began as an idealistic group with no staff, no office, and only one telephone answering machine, soon blossomed into a formidable advocacy organization pioneering the legal fight for gender equality. As we celebrate the 50th anniversary of Legal Momentum we honor the women who first embarked on this historic, enduring and ongoing legal battle against gender discrimination. As we continue to challenge gender inequality, we remember the courage of our second president, Sylvia Roberts, and her client Lorena Weeks - women who dared to imagine a bolder and brighter future for us all.

Be part of the solution.  Please share.      SYMS | Legal Momentum Helpline remains available at NO COST to provide legal information and referrals on issues related to sex discrimination in the workplace, home, school and the courts.

Be part of the solution.  Please share.      In this time of challenge, our legal team immediately developed the NO COST Legal Rights and Economic Resources for Workers Impacted by COVID-19  including Spanish and Chinese translations.

Protecting women’s and girls’ rights begins with the law. Thank you for your ongoing support - you make our work possible!  Stay safe and stay healthy.  Visit our new website and learn of our 50 years of trailblazing  work for gender equality.