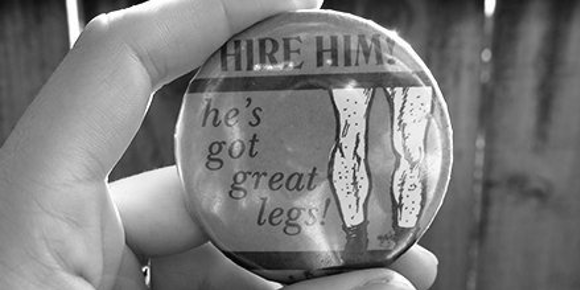 As we reflect on our 50th anniversary of unwavering work for gender equality, we want to share with you one of our early public education campaigns on workplace equality.

Throughout the sixties, sex-based discrimination practices and policies were commonplace, preventing women from working “men-only” jobs, a form of occupational segregation that barred women from making as much money or reaping the same seniority benefits as men.

In the 1970s, the NOW Legal Defense and Education Fund, which would later become Legal Momentum, was focused on bringing important employment discrimination cases under the Title VII provision of the recently passed Civil Rights Act of 1964. Our goal was to establish legal precedents that protected women in the workplace.

However, we came to realize that litigation alone was not a sufficient strategy to expand the field of opportunities for women—we needed to educate the public to a new way of thinking. The women’s movement for workplace rights came up against a media environment that largely portrayed women in advertisements for cleaning products and home appliances, reinforcing the idea that the only proper role for white, middle-class women was as a homemaker. This stigmatized women who sought jobs outside the home and rendered invisible the indispensable work performed by women of color, who had worked outside the home in high numbers for many decades prior.

Midge Kovacs, an advertising executive and national leader for the advancement of women in media, also balked at the “media distortion of the women’s rights movement.” It became clear that, in the words of one of our founders, attorney Sylvia Roberts, we needed to shift public thinking about women in the workplace, and to make clear to the American public how and why “discrimination is unfair.”

Kovacs developed a public service announcement (PSA) in 1973 called Hire Him, He’s Got Great Legs. The campaign sought to highlight the inequality of women’s rights in the workplace, especially around sexist hiring practices. Getting our PSA approved by the National Ad Council, however, was a feat of its own.

When Kovacs first presented Hire Him to the Ad Council in 1971, the Council withheld its approval of the PSA because of its belief that our then-parent organization, the National Organization for Women (NOW), was too political. The Ad Council’s approval was essential to the campaign, as these types of PSAs were rarely successful without it. In response to the National Ad Council’s rejection, Kovacs wrote a searing article in Advertising Age outlining our case and the Ad Council’s refusal to approve our PSA, backed up by unanswered letters and examples of formal presentations and negotiations with the Council. Following publication of her incisive article, the National Ad Council suddenly changed course and approved the campaign.

Our Hire Him, He’s Got Great Legs campaign proved highly successful. The PSA not only ran on 100 television stations in forty states, it also reached readers of national print journals, magazines, and newspapers around the country. A New York Daily News headline referencing the Hire Him campaign called it “A breakthrough for women’s rights ads: acceptance as public service messages.”

The success of the Hire Him campaign led us to develop more PSAs in the early 1980s, initiated by one of our board members, advertising pioneer Jane Trahey. Trahey’s series of PSAs, which covered several aspects of women’s inequality, highlighted what we now call sexual harassment as a form of workplace inequality, which became a central concern of the women’s movement. The PSA’s slogan, “He calls it fun, she calls it harassment,” called attention to the normalization of sexual harassment in the workplace.

Today, the Hire Him, He’s Got Great Legs is remembered as a powerful step forward in public education about women’s workplace rights, and is archived in the United States Library of Congress.

To our founders fifty years ago, who helped pave the way for equal opportunity for all women and girls, and to the working women who make our economy function, we are forever grateful for your strides towards equality. To fifty more.

Praised by national women leaders     The long-standing and deeply experienced SYMS | Legal Momentum Helpline remains available at NO COST to provide legal information and referrals on issues related to sex discrimination in the workplace, home, school and the courts.

Be part of the solution.  Please share.     In this time of challenge, our legal team immediately developed the NO COST Legal Rights and Economic Resources for Workers Impacted by COVID-19 that include Spanish and Chinese translations