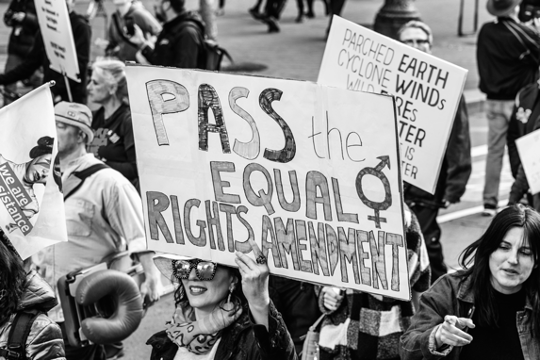 We are proud to be a signatory to the ERA Coalition’s amicus (“friend of the court”) brief in support of the Equal Rights Amendment, along with 51 other gender justice and women’s rights organizations.

The ERA quickly gained momentum after Congress passed it in 1972 with bipartisan support. Within a year, thirty of the thirty-eight states required for an amendment to be added to the Constitution ratified it. Ratification of the ERA was seen as a foregone conclusion until it was met with strong opposition and mobilization efforts from conservatives and anti-feminists. By 1977, progress slowed to a trickle and the ERA stalled just three states short of ratification.

In January 2020, Virginia became the 38th and final state needed to ratify the ERA. This victory capped off a renewed movement in recent years led by the ERA Coalition, of which Legal Momentum is a lead organization, as well as other key stakeholders who mobilized ratifications in the last three states: Nevada in 2017, Illinois in 2018, and Virginia this year. At issue now is whether the 1982 deadline set by Congress in 1972 means that the three recent state ratifications have come too late to be counted. The deadline was not included in the amendment itself, and Article V of the Constitution does not set deadlines for the ratification of amendments. For these reasons, we believe the 1982 deadline should not be allowed to block ratification of the ERA today.

The ERA Coalition’s amicus brief was filed in the U.S. District Court for the District of Columbia by Winston & Strawn LLP. It was led by Linda Coberly, the firm’s Chicago Office Managing Partner, Chair of its Appellate & Critical Motions Practice, and Chair of the ERA Coalition’s Legal Task Force. Legal Momentum is proud to have contributed to the brief’s section on domestic and sexual violence, based on our long-standing expertise on gender-based violence through our National Judicial Education Program (NJEP) and our work on the drafting, passage, and subsequent reauthorizations of the Violence Against Women Act (VAWA).

Topics central to that section of the brief include marital rape, the attrition of rape cases by law enforcement and prosecutors, the reauthorization of VAWA, and other issues relating to intimate partner violence and sexual violence. We believe the discussion of these issues was extremely important to highlight the full scope of the violence to which women are subjected in order to show the court how imperative the ERA is to bringing our society closer to equality, especially for marginalized communities.

This amicus brief was part of a broader litigation strategy to inform the court about the importance of ratifying the ERA. To that end, the ERA Coalition coordinated multiple briefs to articulate the importance of the Amendment by highlighting different perspectives. These other briefs drew from a wide array of voices, including law professors, the business community, the youth movement, the international law community, 19 states and the District of Columbia, the Governor of Montana, the U.S. Conference of Mayors, and pro-ERA advocacy organizations from Virginia, Illinois, and Nevada as well as the unratified states of South Carolina, Louisiana, and Georgia.

Together, the filed briefs span the rich history and importance of what the ERA would mean for this country. We are honored to be among so many notable organizations in the fight for gender equity. The road has been long, but we hope that we will one day soon accomplish the goal of enshrining gender equality in our Constitution.

To read the full brief, visit our website here.

Protecting women’s and girls’ rights begins with the law. Thank you for your ongoing support - you make our work possible!  Stay safe and stay healthy.  Visit our new website and learn of our 50 years of trailblazing work for gender equality.