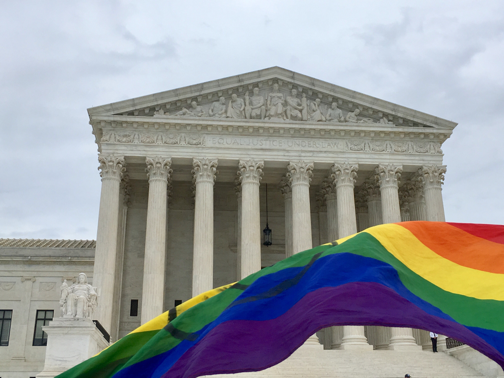 The Court’s analysis rested primarily on whether or not the phrase “because of...sex” in Title VII encompasses discrimination based on gender identity and sexual orientation. Relying on theories long advanced by our legal team, the Court ultimately determined that any employer who discriminates on these grounds inescapably, and illegally, relies on sex in its decision making.

Three decades ago, we submitted an amicus brief in another landmark case, Price Waterhouse v. Hopkins (1989), which shaped Title VII jurisprudence and paved the way for the Bostock victory. Quoting Price Waterhouse, the Court in Bostock outlined Title VII’s “simple but momentous” message, stating that an individual employee’s sex is “not relevant to the selection, evaluation, or compensation of employees.” Furthermore, the Court held that an “individual’s homosexuality or transgender status is not relevant to employment decisions” as it is “impossible to discriminate against a person for being homosexual or transgender without discriminating against that individual based on sex.”

In Price Waterhouse, the Court assessed whether Ann Hopkins, who far outperformed her male colleagues but was denied partnership at the accounting firm Price Waterhouse Cooper for not being “feminine” enough, was discriminated against on the basis of sex. Her suit produced a cornerstone ruling, with the Supreme Court holding that discrimination against an employee on the basis of non-conformity with gender stereotypes constitutes sex discrimination under Title VII.

To help achieve this holding, our then Legal Director Sally Burns and National Judicial Education Program Director Lynn Hecht Schafran worked with the American Psychological Association to submit substantial scientific support on the relationship between sex discrimination and sex stereotyping in the workplace. As a result, Price Waterhouse was the first Supreme Court case to utilize psychological research on sex stereotyping.

Almost a decade after Price Waterhouse, we joined another amicus brief supporting the plaintiff in Oncale v. Sundowner Offshore Services (1998), a case the Court also relies upon in Bostock to note that Title VII can apply to same-sex discrimination if the discrimination or harassment would not have occurred “but for the person’s sex.”

This year, building upon our longstanding advocacy to strengthen protections under Title VII, we signed onto an amicus brief directly supporting the plaintiffs in Bostock, highlighting once again the Court’s consistent recognition of Title VII’s intent to end disparate treatment resulting from sex stereotypes, including sex discrimination connected to sexual orientation and gender identity. Ultimately, the Court decided in Bostock that discrimination against someone for being homosexual or transgender is inherently discrimination because of sex.

As Justice Gorsuch rightly recognized in his opinion, “few pieces of federal legislation rank in significance with the Civil Rights Act of 1964. There, in Title VII, Congress outlawed discrimination in the workplace on the basis of race, color, religion, sex, or national origin...An employer who fires an individual for being homosexual or transgender fires that person for traits or actions it would not have questioned in members of a different sex. Sex plays a necessary and undisguisable role in the decision, exactly what Title VII forbids.”

Since our founding in 1970, we have fought tirelessly to uphold the Civil Rights Act of 1964, and we agree that it remains one of the most important pieces of federal legislation in our country. With last Monday’s landmark decision, the Court solidified the foundations that we helped to establish in Price Waterhouse and Oncale. By upholding and enriching our existing Title VII jurisprudence, the Court’s decision in Bostock represents a necessary step forward in advancing workplace equality to safeguard LGBTQ rights.

We must build upon this important victory to continue to dismantle systemic and structural discrimination to meaningfully achieve equality in our workplaces for everyone.

If you’d like to see us continue to lay the groundwork for landmark cases such as this, please consider investing in our work.

Today, and everyday, we stand for equality. Thank you for your ongoing support - you make our work possible!

Visit our new website and learn of our 50 years of trailblazing work for gender equality.