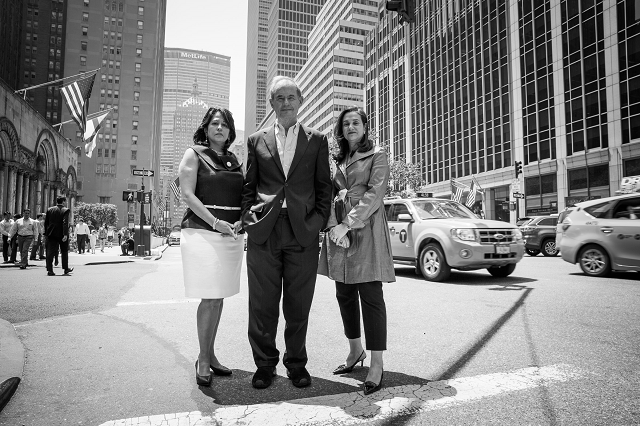 An upcoming documentary film, “I Am Jane Doe,” chronicles the battle that several American mothers are waging on behalf of their middle-school daughters—victims of online sex trafficking. Legal Momentum’s Carol Robles-Román, Penny Venetis, and renowned lawyer David Boies of Boies, Schiller and Flexner appear in the film. Legal Momentum will use this compelling movie as a teaching tool to reach girls, families, and government leaders.

The Jane Doe plaintiffs featured in the film include middle-school girls from Boston, a 15-year-old from Seattle, and a 13-year-old girl from St. Louis. The film follows these young girls and their mothers as they seek justice for the harm they suffered.

“I Am Jane Doe” will premiere in AMC theaters in selected cities, including New York, Washington, D.C., Boston, Seattle, and Philadelphia, on February 10, 2017. To view the trailer or find a screening near you, go to www.iamjanedoefilm.com. An #IAmJaneDoe social media campaign was launched on January 11, National Human Trafficking Awareness Day. Half of all profits from the movie will be donated to nonprofit organizations which serve Jane Doe children.

Legal Momentum Featured in The New Yorker “Talk of the Town”

Legal Momentum was featured in “ ‘I Am Jane Doe’ Takes on Backpage” in The New Yorker magazine’s January 16, 2017 issue. The piece about the documentary and Legal Momentum’s anti-trafficking work features and quotes Carol Robles-Román, David Boies, and the film’s producer, Mary Mazzio, discussing our work to find innovative legal strategies to end online child trafficking.

To combat online sexual exploitation of children in the United States and around the world, Legal Momentum has created an international alliance including the Thomson Reuters Foundation, superstar lawyer David Boies and the Boies, Schiller & Flexner firm, and Mary Mazzio, producer of the forthcoming documentary, “I Am Jane Doe.”

“Judges say that online companies are protected by a law called the Communications Decency Act, which was passed to protect children from harmful materials on the web,” Carol told the audience of international leaders and advocates. “I am here to speak up and fight back. We must change dated laws, court decisions, and educate all judges and lay people alike on protecting children in this new digital age.” 45 international delegates and 30 U.S. supporters have pledged their support of Legal Momentum's Action. You can view highlights of Legal Momentum’s call to action on YouTube. (Carol’s full recorded presentation, including the “I Am Jane Doe” trailer, is also online.)

To help, in Carol's words, "expose the greatest human rights violation of the 21st century and end this evil," you can also join this partnership. Email us at info@legalmomentum.org with how you would like to help. Speak up and fight back on social media with hashtag #KidsRNotSafe and follow @KidsRNotSafe and @LegalMomentum on Twitter.

On January 9, the U.S. Senate Permanent Subcommittee on Investigations Committee on Homeland Security and Government Affairs, chaired by Senator Rob Portman (R-OH) with Senator Claire McCaskill (D-MO), issued its report on its investigation into the business practices of Backpage.com and its owners. The damning report found that Backpage has knowingly concealed evidence of criminality and that it facilitates prostitution and child sex trafficking.

The report cited Legal Momentum’s amicus brief to the U.S. Supreme Court in Jane Doe v. Backpage.com. Our brief argued that Congress intended the Communications Decency Act (CDA) to provide good Samaritans to protect children from online sexual predators and abuses, and that courts have wrongly used the CDA to protect websites that facilitate the worst form of commercial sexual exploitation—online trafficking.

Rising International in the News 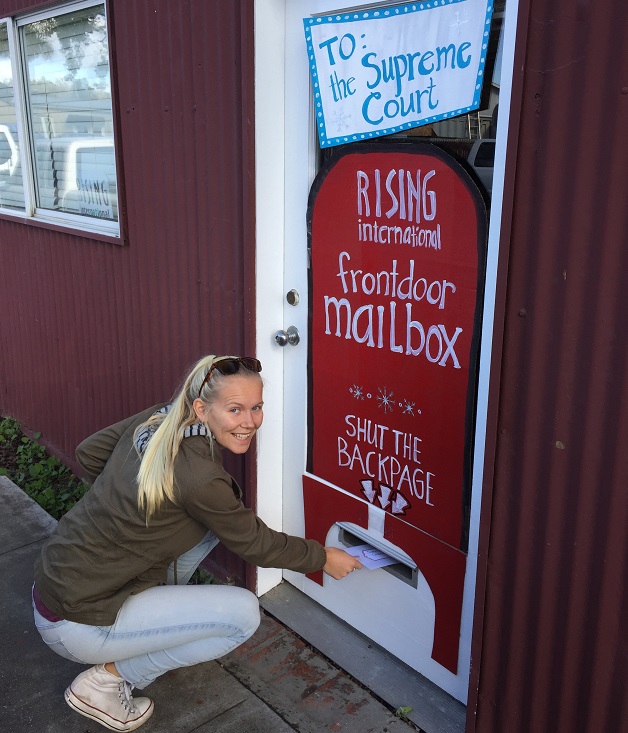 Legal Momentum’s Anti-Trafficking Coalition partner Rising International made television news recently with its creative call for public support to urge the U.S. Supreme Court to take the case of Jane Doe, et al. v. Backpage.com et al. The plaintiffs are three girls who were sold for sex via the notorious “adult” website when they were young teens.

Teens working with Rising International penned holiday cards to the U.S. Supreme Court, asking it to take the case and support the three women. Rising International collected the cards and delivered them to the Court in January on behalf of trafficking survivors everywhere. View the KSBW-TV news clip online at this link: http://www.ksbw.com/article/christmas-cards-help-child-sex-traffiking-victims/8522975. Kudos to Rising International and to all our partners for all of your anti-trafficking work!

The International Visitor Leadership Program is an official U.S. government exchange program administered by the Department of State. On December 7, 2016, Legal Momentum’s Executive Vice President and Legal Director, Penny Venetis, met with 10 women leaders from North Africa and the Middle East, including Libya, Saudi Arabia, and Egypt, to discuss issues that impact women around the world—such as domestic violence, pregnancy discrimination, and pay inequality. They also discussed ways to use technology to partner on projects and support one another’s work. The visitors included journalists, academics, and government officials, including a member of the Iraqi government.

In late December, Legal Momentum and its national stakeholders, represented by David Boies of Boies, Schiller & Flexner LLP, filed an amicus brief urging the D.C. Circuit Court of Appeals to decide in favor of the U.S. Senate in its action to require the website Backpage.com's parent company to comply with a Senate subpoena. The Senate is requesting information about Backpage.com as part of an investigation into its business practices. Last spring, the Senate held Backpage.com’s CEO, Carl Ferrer, in contempt of Congress for failing to appear at a Senate investigative hearing.

Speaking Out on Human Rights and Domestic Violence

On December 8, 2016, Legal Momentum presented its “This Workplace Is a DV-Free Zone” webinar. The webinar outlines best practices for workplace policies for employees who are survivors or perpetrators of domestic violence. The webinar was given by Maryann Gallagher, Senior Fellow, who has been working with employers around the country that are interested in implementing a workplace domestic violence policy. A recording of the original presentation of the webinar is available on Legal Momentum’s website. You can request a copy of the model policy on our web inquiry form. The DV-Free Zone Bill of Rights poster can be downloaded and printed for posting in workplaces. 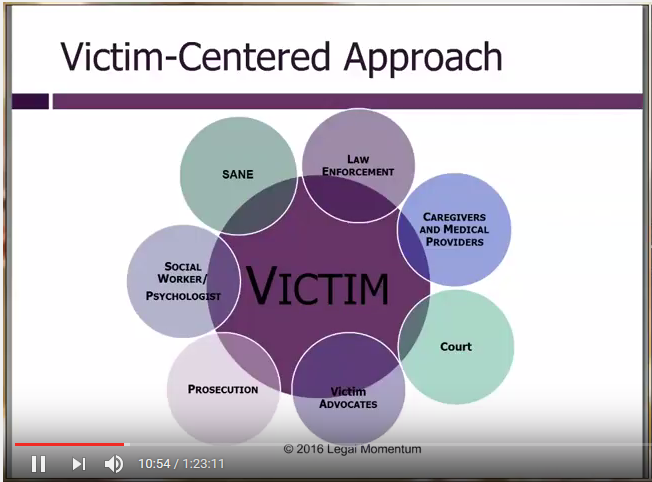 One hundred and twenty-six victim advocates and others attended the webinar. Several participants followed up to thank Legal Momentum and request help with implementing this multidisciplinary approach in their communities. As a result of the webinar, Legal Momentum was invited to give a presentation and keynote address on this topic for the first Indiana Statewide Sexual Assault Response Team training in April, 2017.

Legal Momentum's 12th Annual Women of Achievement awards will salute the accomplishments of extraordinary women who are at the top of their professions, in San Francisco on Wednesday, March 22, 2017. The six women being celebrated for their distinction in business, law, and public service are:

Legal Momentum is seeking a qualified candidate for a new two-year Gender Justice Fellowship. The Fellow will work with grassroots organizations, the media, government entities, labor unions, and advocacy organizations on behalf of Legal Momentum’s mission of gender equality, with a strategic focus on parity in the workplace. The Fellow will serve as an ambassador for our work among girls and younger women. For a full job description and how to apply, visit Legal Momentum’s website and go to Career Opportunities on the About menu.