Now available from the Legal Momentum website, free of charge, is the new fact sheet covering answers to frequently asked questions (FAQ) about the new New York State Paid Family Leave Law. The law will take effect on January 1, 2018. As part of Legal Momentum’s Legal Protections for Women in the Workplace series, the New York State Paid Family Leave FAQ provides a concise overview of the law’s provisions and answers questions such as “Am I eligible?”; “When can I start taking paid family leave?”; and “How much paid leave can I take?” It was prepared by Gender Justice Fellow Seher Khawaja. Legal Momentum also advocated for passage of the new state law before it was enacted in 2016, as reported in the February/March 2016 News Brief. The law provides for paid leave for new and adoptive parents and other caregivers, and applies equally to women and men.

On December 4, Senior Staff attorney Jennifer Becker led Legal Momentum's presentation, "Legal Rights and Remedies for Student Victims of Sexual Assault," as part of Queensborough Community College's required "College Discovery Program" fall semester presentation series for new college students. The presentation covers legal rights, mostly under Title IX, for student survivors of sexual assault on campus. This presentation, also given on November 8, is a part of our New York City-area five-campus tour to educate students about their rights under Title IX. The federal Department of Education recently changed its guidelines for schools, resulting in widespread confusion. Legal Momentum aims to clarify the responsibilities Title IX imposes on schools to respond to complaints of sexual assault. Ultimately, despite changes in the federal guidance, the law itself remains the same.

Legal Momentum's Gender Justice Fellow, Seher Khawaja, was a speaker for "Women's Rights in the Workplace and Reproductive Justice," at Columbia University on November 14. As part of Columbia’s Social Justice Initiative, the panel sought to shed light on an often-overlooked topic: how challenges in reproductive rights affect women’s ability to pursue equality in the workplace. Seher pointed out that lack of reproductive freedom, combined with inadequate workplace protections, limits women’s decision-making capacity, especially for low-income women. Gaps in our legal infrastructure tend to reinforce gender-based disadvantages, first, by limiting women’s ability to control reproduction, and second, by ignoring the difficulties women face in the workplace once they become pregnant. The panel also discussed critical new legislative and policy initiatives, the costs and challenges that women face when suing employers for discrimination, and the ways we can make an impact going forward.

Streamlined Intake Form Makes It Easier to Get Help

Legal Momentum has streamlined its online "Help Request Form" to make it easier to use for women who come to our site seeking legal assistance and referrals. In the past year, about one-third of inquiries were submitted via the form, with the remainder coming in over the phone or in email. 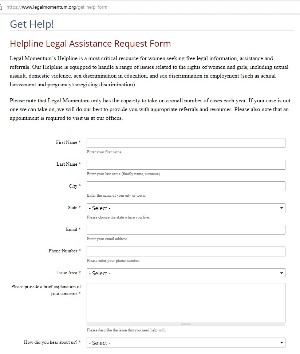 After an analysis of the requests for legal advice and referrals submitted through Legal Momentum’s website over the past four years, we have revamped the online form to make it simpler and easier to use, with clearer language and streamlined form fields. The new form is available at https://www.legalmomentum.org/get-help-form. To avoid confusion, any external links to the previous form will automatically be redirected to the new one.