On September 17, New York City Comptroller Scott M. Stringer released a report that demonstrated overwhelming support for flexible and family-friendly workplace policies such as paid time off and advance notice of shift schedules. The report, “Families and Flexibility: Building the 21st-Century Workforce,” highlighted that most employees are reluctant to even ask their employers for flexibility. Legal Momentum joined the call for “Right to Request” legislation, on both the state and federal levels, which would enable workers to improve productivity while also caring for their families. 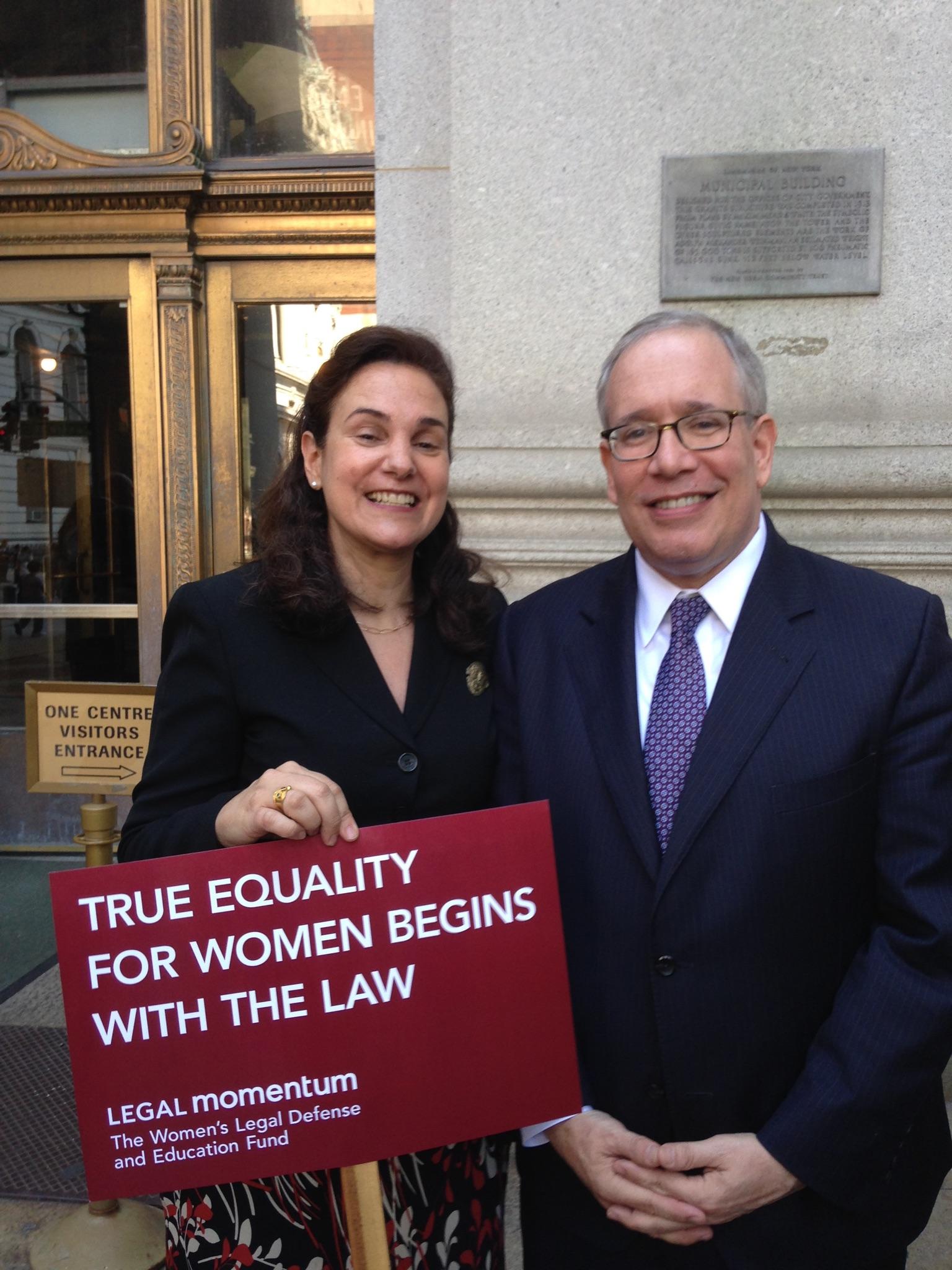 “For 45 years, Legal Momentum has fought to make the workplace more family-friendly and welcoming to women, including pregnant women and working mothers,” said Penny M. Venetis, Executive Vice President and Legal Director. “Legal Momentum supports any legislation that would allow women and men to reach their full potential as workers, without abandoning their responsibilities to their families. Today’s technology permits all workers to have more flexible work hours so that they don’t have to choose between a paycheck and a sick child or parent.”

In mid-August, Legal Momentum reached a settlement with the City of New York on behalf of our client, New York City Police Officer Akema Thompson. In March 2014, Legal Momentum filed a charge of pregnancy discrimination with the Equal Employment Opportunity Commission against New York City’s Department of Central Administrative Services (DCAS) on behalf of Officer Thompson, who was unfairly denied an opportunity for promotion to sergeant when the City refused to reschedule the date of a promotional exam originally scheduled for the pregnant officer’s delivery date. Despite repeated emails and letters both by Officer Thompson and by the Patrolmen’s Benevolent Association (PBA) on her behalf, the City refused to reschedule the exam. 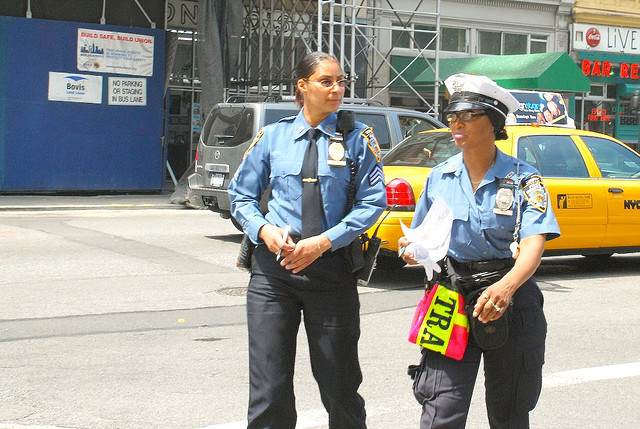 The settlement requires New York City to provide appropriate pregnancy accommodations to female city employees to ensure that they are not denied jobs or opportunities for promotion, simply because they are—or will become—pregnant. Legal Momentum President and CEO Carol Robles-Román said, “In 2015, there is no excuse for denying pregnant women reasonable accommodations to enable them to work on an equal basis with everyone else.” PBA President Patrick Lynch said, "Police officers should not be forced to choose between starting a family and seeking a promotion. We applaud Legal Momentum's hard work on behalf of Officer Thompson and all PBA members."

Legal Momentum is calling on other cities to follow New York’s lead. Many major cities—including Los Angeles, Boston, San Diego, Chicago, and Seattle—do not have clear policies that allow pregnant women to reschedule civil service tests. Legal Momentum has reached out to the mayors of municipalities around the country urging them to follow New York’s lead to ensure that appropriate pregnancy accommodations are available to all women who wish to take a civil service exam in their cities.

According to the U.S. Department of Labor, nearly one in five women work in the public sector. “Officer Thompson’s case has been an important part of our efforts to improve women’s access to non-traditional jobs such as policing, sanitation, and firefighting, and to ensure fair treatment for working mothers,” Carol added.

Legal Momentum Board member Loria Yeadon spearheaded an event with Legal Momentum in Bellevue, Washington, on August 15 to raise awareness of campus sexual assault in colleges today and address ways to end the epidemic. The event featured a screening and panel discussion of the documentary about campus sexual assault, The Hunting Ground, and was attended by a diverse group of students, parents, university administrators and faculty, government officials, parents, activists, and others.

The screening and panel served as catalysts for action. The discussion moved from surprise and outrage that sexual violence is prevalent on campuses, to panelists and audience members mapping out a strategy to end the violence. As Loria Yeadon said, “We can no longer allow universities to self-manage this issue.”

Action items proposed by the panel include:

On behalf of the event’s organizers and attendees, Loria has already reached out to Washington colleges and universities to seek ways to work together to combat the scourge of campus sexual assault and end the stigma for survivors. In addition, Legal Momentum has created two new fact sheets for survivors of campus sexual assault—Surviving Campus Sexual Assault: An Overview of Your Rights as a Student, and Resources for Sexual Assault Survivors in Seattle. Both are available for free download from Legal Momentum’s website, where you can also read more about the event.

“Trafficking can thrive because this crime is often hidden from the public eye. We can fight this human rights violation by recognizing the signs and knowing how to help potential victims, particularly at-risk youth.”
— Carol Robles-Román

Photographs of prominent activists, pioneering social justice leaders, and courageous trafficking survivors were featured in Photoville, a premier photography venue held in Brooklyn Bridge Park from September 10th to 20th. The New York’s New Abolitionists photo exhibition, book, and campaign brings attention to human trafficking by celebrating leaders in the anti-trafficking movement in the 21st century. Carol Robles-Román is featured in this powerful series of 172 portraits by photographer Lynn Savarese, which also features leaders such as Attorney General Loretta Lynch, Meryl Streep, Senator Charles Schumer, Michael Bloomberg, and feminist icon Gloria Steinem. More than 70,000 people attended the week-long showcase of 70 exhibitions by more than 400 artists. This provided an invaluable opportunity to raise public awareness about human trafficking and what it will take to end it.

On August 21 and 22, Legal Momentum’s National Judicial Education Program repeated its Enhancing Courts’ Response to Adult Victim Sexual Violence program in Walla Walla, Washington. The program, first presented for Washington judges in February, was presented in collaboration with the Washington State Administrative Office of the Courts, the Washington State Gender and Justice Commission, and the King County (Seattle) Sexual Assault Resource Center, with support from the Department of Justice Office on Violence Against Women (OVW). NJEP Director Lynn Hecht Schafran presented both the NJEP curriculum Raped or “Seduced”? How Language Helps Shape Our Response to Sexual Violence and NJEP’s intimate partner sexual abuse curriculum, based on NJEP’s web course Intimate Partner Sexual Abuse: Adjudicating This Hidden Dimension of Domestic Violence Cases, which is available online at www.njep-ipsacourse.org. Other segments of the program explored the neurobiology of trauma, the impact of vicarious trauma on judges, complex evidentiary and enforcement issues in state and tribal courts, and judicial leadership on the issue of sexual assault within the code of judicial conduct. The curriculum on sex offenders used NJEP’s nationally recognized DVD The Undetected Rapist.

Eileen Simon, Chief Franchise Integrity Officer at MasterCard, has been elected to the Legal Momentum Board of Directors. Ms. Simon was a 2015 Legal Momentum Aiming High honoree for her career achievements, and her work promoting diversity and inclusion and women’s leadership. Ms. Simon has worked at MasterCard for 16 years, and previously served as Chief Franchise Development Officer, and Group Executive and Senior Associate General Counsel. She is also a member of MasterCard’s Global Diversity and Inclusion Council. Since 2010, she has been executive sponsor of the global Women’s Leadership Network. Before joining MasterCard, Ms. Simon practiced law at Weil, Gotshal, and Manges. Ms. Simon is also on the Board of Directors of the YWCA of White Plains and Central Westchester, and is a member of The Conference Board’s Leadership Council on Advancing Women. She was named a “Super Lawyer” in 2007 and is a member of the bar in New York and Connecticut.

On the 43rd anniversary of Title IX, which was enacted to eradicate gender discrimination in education, members of Congress were briefed on its strengths and shortcomings. In the 1970s, Legal Momentum led the way in ensuring implementation of Title IX through its Project on Equal Education Rights. The briefing, which took place on July 27, was organized by the National Coalition for Women and Girls in Education and hosted by the office of Maryland Senator Barbara Mikulski. Lisalyn Jacobs, Legal Momentum’s Vice President for Government Relations, spoke about Title IX’s role in stopping sexual harassment and assault, focusing on why the campus disciplinary process is a necessary and valid avenue of response, as well as the criminal justice system. Title IX responds to the needs of the victim in ways that the criminal justice system, which is exclusively focused on offender accountability, cannot. For example, a victim may need an incomplete, counseling, or not to have to take classes or live in a dorm with the perpetrator. Representatives of the Feminist Majority Foundation, AAUW, National Women’s Law Center, Champion Women, and Equity Legal also testified at the hearing.

Three current and former Legal Momentum staff members were honored with the 20/20 Award by the American Bar Association (ABA) at its annual meeting in July. To recognize and celebrate the 20th anniversary of the Violence Against Women Act (VAWA) and the creation of the Commission on Domestic and Sexual Violence (also 20 years ago), the ABA honored 20 trailblazers who played an instrumental role in drafting and passing VAWA and mobilizing the legal profession against domestic and sexual violence, and who have continued their dedication to these issues over the decades. The 20 trailblazers included Legal Momentum’s Lisalyn Jacobs, Vice President for Government Relations (at center in photo), and two former Legal Momentum Staff Attorneys, Sally Goldfarb (left) and Julie Goldscheid (right).

On August 21, U.S. District Judge Dolly Gee of the Central District of California issued a ruling requiring the release of refugee children with their mothers from Department of Homeland Security (DHS) family detention centers. The court also ruled that conditions in temporary Border Patrol stations fail to meet minimum standards for safety and sanitation. Legal Momentum applauds this ruling and calls on the Obama Administration to comply with the order by releasing refugee families as quickly as possible. As Carol Robles-Román pointed out in a Miami Herald Op-Ed, Obama’s Immigrant Detention Policies Hurt Mothers, Children, which she co-authored with Elisa Massimino of Human Rights First on Mother’s Day, the Administration’s operation of family detention centers is “not only cruel but unnecessary.” Confinement of children causes long-lasting damage to their well-being. Women and children currently held in family detention have fled persecution, torture, and extreme violence in their home countries, including domestic violence and rape. Detention exacerbates the mental health problems often experienced by survivors of violence and also hinders their access to legal representation. The operation of inhumane family detention facilities violates the human rights of refugee families, who are entitled to seek asylum under U.S. law. There are lower-cost and safer alternatives that can ensure that asylum-seekers show up for their hearings.

Inspiring Young People to Work for Justice, Equality, and Diversity

In July, Legal Momentum hosted a luncheon seminar for two dozen high school, college, and law student interns of the Asian American Legal Defense Fund, the NAACP Legal Defense Fund, Latino Justice, and Legal Momentum at the Thurgood Marshall Federal Courthouse in Manhattan with Federal District Court Judge Nelson Román. The judge and students discussed how to get ahead and succeed and also maintain a strong commitment to fairness, justice, and diversity.