Carol Baldwin Moody, LM’s President and CEO, was an honored guest in Washington for Women’s Equality Day, where she met with Justice Ginsburg and other women leaders for a private conversation about the future of women’s equality. Hosted by the National Women’s Party, the event asked leaders like Carol to be part of a vibrant conversation about voting rights and women’s equality under the law.

The event took place on August 26, the anniversary of women’s suffrage in the United States, at the Belmont-Paul Women’s Equality National Monument in Washington, D.C. The conversation was moderated by Jill C. Morrison, Executive Director of the Women's Law and Public Policy Fellowship at Georgetown Law School. Justice Ginsburg served on Legal Momentum’s Board of Directors in the 1970s, when it was known as the NOW Legal Defense and Education Fund.

Playboy Magazine’s recent article drew heavily on commentary from Legal Momentum’s Legal Director, Lynn Hecht Schafran. The explosive article points out that the current process for adjudicating sexual assault cases between students is “shockingly flawed” and it looks for “hope amid the chaos.” Ms. Schafran explains that “Even if an assault is reported, police are generally the ones who ultimately determine whether to refer a case for prosecution.”  The article also explains that colleges have an obligation to protect students from a hostile environment and that there is a need for a campus process as well as a criminal process. As Ms. Schafran points out, not all victims want to get involved in the criminal system, because “They know how invasive it is and that it can take years.” She further explains the challenges of prosecuting sexual cases, even when they are reported to police.

The National Judicial Education Program’s acclaimed presentation, Judges Tell: What I Wish I Had Known Before I Presided in an Adult Victim Sexual Assault Case, was presented for the Georgia Superior Court Judges Summer Conference at Jekyll Island, Georgia, on August 29, 2018. 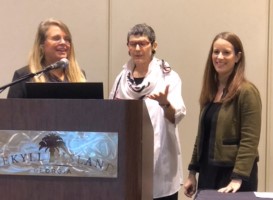 Presenting the program were NJEP’s Director, Lynn Hecht Schafran, and Senior Attorney, Jennifer Becker. It has been delivered to courts and judicial groups nationwide. It dispels commonly-held myths, educates judges on the realities of sexual violence, and helps them adjudicate cases more fairly by using a trauma-informed response to the victims.

Did you know? The Violence Against Women Act (VAWA), one of the nation’s single most effective tools in responding to domestic violence, dating violence, sexual assault, and stalking, is in danger of expiring! VAWA is currently only authorized through September 30, 2018. What can you do? Call your Representative right now. If they haven’t signed on as a co-sponsor of the Violence Against Women Reauthorization Act of 2018 (H.R. 6545), ask them to do so immediately. If your Representative has signed on as a co-sponsor to H.R. 6545, please call them and thank them.

Find your Representative at house.gov (just enter your ZIP code), and then check out the list at https://www.congress.gov/bill/115th-congress/house-bill/6545/cosponsors to see if they havesigned on to support VAWA yet.

Legal Momentum urges its supporters to help us ensure that VAWA gets reauthorized this year—with all of the new critical proposals that are included in the current reauthorization bill: housing protections, protection from abusers with guns, justice for survivors on tribal land, and increased prevention funding.

If you want to learn more about VAWA and the critical enhancements in H.R. 6545, register for a webinar hosted by the National Task Force to End Sexual and Domestic Violence titled “VAWA Reauthorization: What’s in it, and what happens next.”