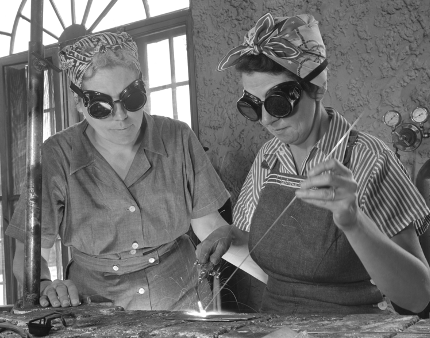 As we reflect on our organization’s 50th year of unwavering championship of gender equality, let’s explore one of our trailblazing first cases that followed the formal incorporation of our non-profit organization in 1970—the first case in U.S. history to challenge single-sex workplace laws.

While Black women in the United States have long worked outside the home in racially - and gender-segregated jobs, white women began entering the workforce in unprecedented numbers at the turn of the Industrial Revolution. While economic changes necessitated more women taking jobs in the paid workforce, their role in the economy remained vastly different and limited compared to their male counterparts.

As more women, particularly white women, entered the workforce, states began establishing legal barriers to the kind of work available to women generally. These laws had a lasting effect in entrenching gender stereotypes and dictating what jobs were deemed acceptable for women, often placing female workers in positions such as nursing and teaching that restricted their earning power.

Women of all racial backgrounds entered the workforce in dramatically expanded numbers in World War II, when women replaced male adults who were joining the armed forces. Though this shift opened fields traditionally closed to women, women were consistently underpaid relative to men.

Moreover, women faced pressure to relinquish their jobs to men when the men returned from war. The resulting widespread dissatisfaction of white middle-class women in the U.S. pushed back into the home was captured by Betty Friedan in 1968 in her book The Feminine Mystique, credited with sparking the second wave of feminism worldwide.

By 1967, discriminatory hiring practices resulted in an income gap where college educated working women made upwards of $1,000 less annually ($7,810 in today’s dollars) compared to men with only an eighth grade education, a gap even more stark for Black women and women of color.

Title VII also created the Equal Employment Opportunity Commission (EEOC) to respond to complaints of employer violations—helping to alleviate financial barriers in initiating lawsuits against employers. Additional 1966 legislation paved the way for class action lawsuits, a type of litigation that allows individuals to take collective action in court. Betty Friedan, influential in our founding and one of our pioneering board members, credited Title VII as a source of “collective strength” as we worked to overturn single-sex protective laws and corporate policies targeting women.

We were instrumental in the first case to challenge single-sex workplace laws before a federal court in Bowe v. Colgate (1973). Women workers at Colgate, a national manufacturer of household and consumer goods, filed a complaint against their employer for its discriminatory seniority system—warped by a restriction prohibiting women from lifting more than thirty-five pounds—which effectively boxed them out of higher paid labor roles.

The complaint was filed under Title VII, on the grounds that workplace policies and practices that limited responsibility based on sex alone are discriminatory because they fail to take into account employees’ individual strengths and capabilities. While the suit was dismissed at the trial court level, our activist efforts contributed to the original ruling being appealed to the Seventh Circuit Court of Appeals.

Our lawyers collaborated with Human Rights for Women to file amicus briefs demonstrating the impact of single-sex laws on women’s economic advancement. Amicus briefs would prove to be one of our most powerful tools in the legal fight for women’s rights. The Seventh Circuit overturned the initial ruling, establishing that a company’s weight limit for a job can only exist as a general guideline for all of its employees.

This win paved the way to establishing a legal framework for challenging one of the many ways discrimination against women resulted in differential economic participation and workplace advancement. It also sparked a renewed interest in the idea of an Equal Rights Amendment to the Constitution as a lasting strategy to provide equal protection for all under the law, regardless of gender.

Your support has made our fifty years of trailblazing possible. Please give to our annual June Appeal to help ensure our work continues for another groundbreaking fifty years.

Be part of the solution.  Please share.      In this time of challenge, our legal team immediately developed the NO COST Legal Rights and Economic Resources for Workers Impacted by COVID-19 that include Spanish and Chinese translations.

Today, and everyday, we stand for equality.  Thank you for your ongoing support - you make our work possible!