On July 7, 2015, "Enough Is Enough," groundbreaking legislation to combat sexual violence on college and university campuses in New York State, was signed into law by Governor Andrew Cuomo. Legal Momentum advocated successfully for the new law, which provides comprehensive policies to prevent sexual abuse and assault on campus and support victims.

Legal Momentum's Pipeline Project worked to increase girls' enrollment in 14 career and technical education (CTE) high schools throughout New York City. Despite the protections of Title IX, girls are often underrepresented in CTE. Through CTE girls can gain skills necessary to enter higher paying "nontraditional" occupations for women, which in turn will have an effect on closing the gender wage gap.

Legal Momentum files friend-of-the-court brief in Sprogis v. United Airlines in federal court in Illinois. The court strikes down the airline’s discriminatory policy of firing female flight attendants if they marry, ruling that it is unlawful sex discrimination under Title VII because no such policy applies to any male employees. 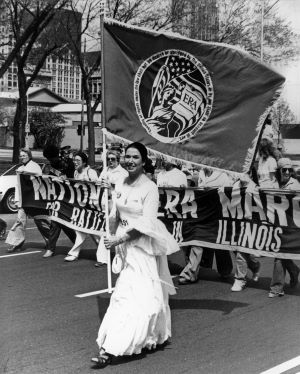 We are the nation’s first and oldest legal defense and education fund for women.  Called the NOW Legal Defense and Education Fund (NOW LDEF) until 2004, we have always been at the forefront of the unceasing, unheralded and often controversial battle for gender equality. 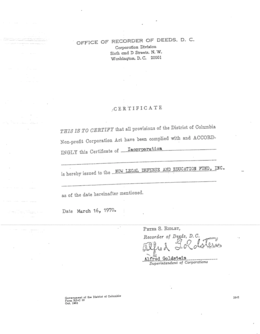 Incorporated as a non-profit on March 16, 1970, we were started by the founders and earliest members of the National Organization of Women (NOW) to help eliminate sex discrimination through legal action and education. Our earliest board members included co-founders of both NOW and our organization, Betty Friedan, Muriel Fox, Sylvia Roberts, and Gene Boyer - who all continued to be on the front lines through our earliest legal action and projects.  Many of those inaugural board members have gone on to other frontiers of women's rights such as Ruth Bader Ginsberg, Gabrielle McDonald, and Marilyn Hall Patel as Supreme Court and federal judges. We take great pride in those who have worked with us over our almost fifty years - pioneers that engineered our groundbreaking and ongoing contributions to woman's equality.

Among NOW's founders were several lawyers who were seriously developing litigation strategies for sex discrimination cases. Marguerite Rawalt, one of the original thirty founders of NOW and a highly respected government lawyer, had been active in pro­fessional legal organizations and developed over the years a loose "network" among the then few female attorneys around the country. Some, like Sylvia Roberts, of Baton Rouge, Louisiana, heard about the founding of NOW and joined immediately.  At that time, any attorney who joined NOW was quickly recruited to serve on its Legal Committee.

Learn more about The Journey: Our First Ten Years

Our Work for Racial Justice

our history working for racial justice

At Legal Momentum, we recognize that the fight for gender equality is also a fight for racial justice. We understand that to tackle gender discrimination, we must also address the institutional racism faced by people of color in this country. We know that discrimination in any form puts marginalized groups at greater risk of economic hardship, exclusion, and violence. And, we have seen how women of color struggle with the 'double burden' of gender and racial discrimination that restricts their opportunities despite their persistent activism as leaders in the civil rights movement. These are truths that have informed and continue to inform our work.

Learn more about our work for racial justice