Today is the second annual National Gun Violence Awareness Day. Across the nation, people are wearing orange to honor the millions of lives affected by gun violence and spur action to prevent gun violence nationwide. The Wear Orange campaign is spearheaded by Everytown for Gun Safety. It was inspired by a small group of teens at a South Side Chicago high school who wore orange—the color that hunters wear in the woods to protect themselves and others—to honor the life of a classmate killed by gun violence in 2013. 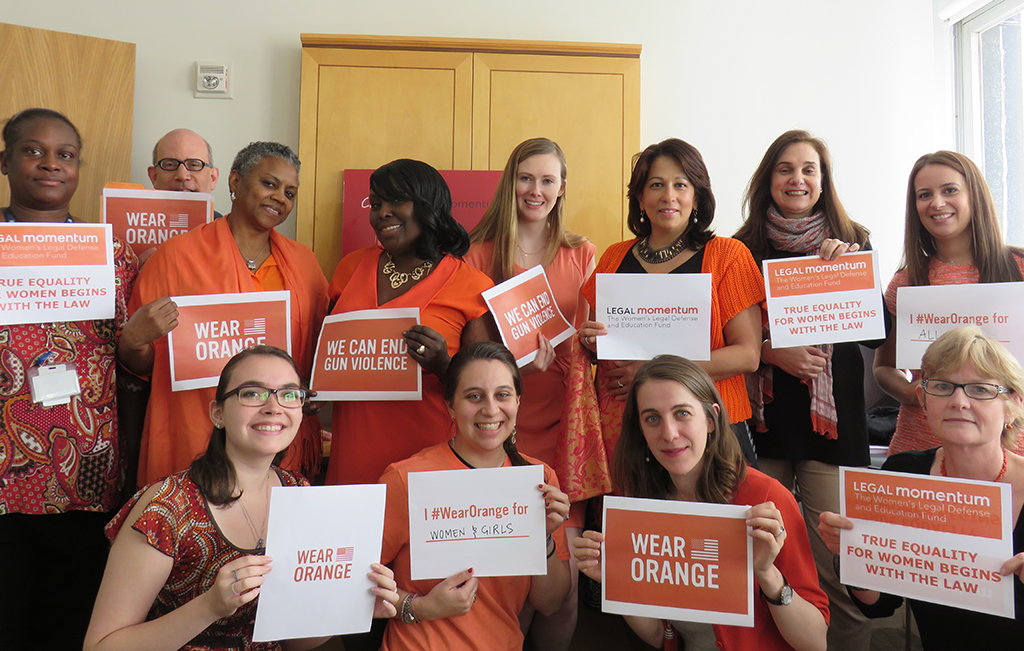 Legal Momentum wears orange today to honor all those affected by gun violence—especially victims and survivors of intimate partner violence. As a national leader in advancing the rights of women and girls, we cannot ignore the fact that women in the United States are 11 times more likely to be murdered with a gun than women in other developed countries.

Domestic violence is a pervasive issue in American society. A national survey revealed that 1 in 3 women have experienced physical violence, sexual violence, or stalking by an intimate partner in their lifetime—with 1 in 4 women experiencing severe physical violence. This appalling epidemic results in an average of 48 women being shot to death by an intimate partner every single month. In fact, according to the National Network to End Domestic Violence, more than half of all women killed with guns are killed by their intimate partners. Firearms have been the murder weapon in more intimate partner homicides over the past 25 years than all other weapons combined. We must end the culture of complacency that puts guns in the hands of those who abuse women.

As a nation, we can—we must—do much more to protect women from gun violence. As unfathomable as it seems, when a domestic abuser has access to a firearm, the risk that his partner will be killed increases by more than 500 percent. It is crucial to ensure that our firearm laws are effective in keeping guns out of the hands of domestic abusers. Strong laws that keep guns away from domestic abusers save women’s lives.  For example, an analysis by Everytown for Gun Safety revealed that in states that require background checks on all handgun sales, 38 percent fewer women were shot to death by their intimate partners.

Although the federal Violence Against Women Act prohibits convicted abusers from possessing guns, there are gaps in the law that still give domestic abusers access to firearms. State laws around the country vary in their effectiveness in closing these legal loopholes. For example, in many states only domestic violence offenders who are married, co-habiting, or have children with their victim are prohibited from possessing firearms, leaving abusers in dating relationships eligible for gun ownership. In many states a temporary restraining order issued against someone for domestic abuse does not prohibit that person from possessing a firearm. We can do more to protect women from deadly abuse by intimate partners. Firearms should not be put into the hands of those perpetrating domestic abuse.

Legal Momentum is proud to join with more than 100 local and national advocacy and faith-based organizations to honor the many lives affected by gun violence and call for action to prevent gun violence. For more information, or to get involved in the Wear Orange campaign, please visit the Wear Orange homepage.