Urging the Senate to Strengthen Laws That Protect Women 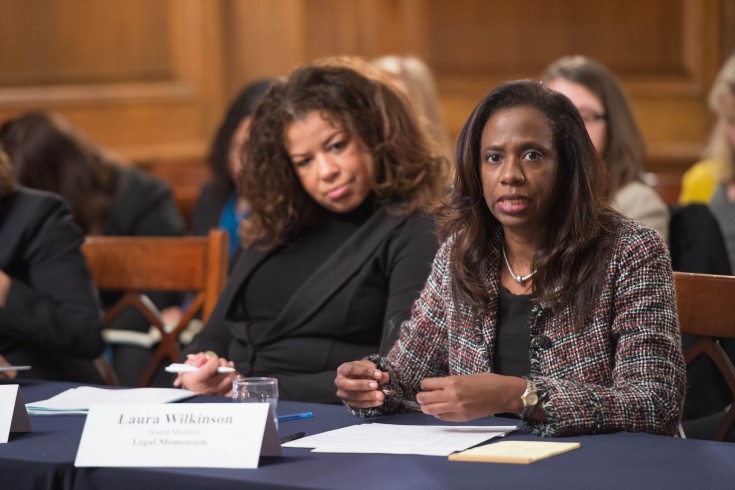 Legal Momentum works to help shape the laws that define and defend women’s rights at the national level. Laura Wilkinson was in Washington on Wednesday highlighting our top legislative priorities for Senate leadership. The Senate Democratic Steering and Outreach Committee engaged leaders of national women's organizations to discuss key priorities and help develop the Democratic legislative agenda. It was a very lively discussion of strategies for the coming year to promote policies that benefit working women and their families. Laura’s points to the DSOC focused on three key areas:

Laura noted that Legal Momentum is a longstanding advocate for the rights of pregnant workers and—regardless of the outcome of the Supreme Court case—there will continue to be a need for strong legislation in this important area. Legal Momentum has also been at the forefront of implementing fair policies for survivors in the workplace. As Laura emphasized, “These are economic security issues, productivity issues, and fundamentally, issues of workplace fairness.  All too often the abusers don’t get fired, but the survivors do.” She provided the Senators with a letter from the National Task Force to End Sexual and Domestic Violence Against Women (which Legal Momentum founded and co-leads) signed by nearly 250 national, state and local organizations in over 40 states asking for more attention to this issue. On Title IX —and in the same week where another Senate committee heard testimony about how to improve law enforcement responses to sexual assault on campus—she urged the Senators to recognize the wisdom of continuing to provide victims with both an administrative/civil rights/campus based process and the ability to bring criminal charges.

Less than one percent of New York City’s 10,500 firefighters are women, a smaller proportion than in many other cities. At the City Council’s hearing on oversight and proposed new reporting requirements for the FDNY, jointly hosted by the Committees on Women’s Issues, Fire and Criminal Justice Services, and Contracts, Christina Brandt-Young emphasized to the Council members that the FDNY’s hiring of women has not improved since the 1980s, and that it lags behind many other cities around the nation—and the world—in employing qualified women. “It is a myth that women are not strong or fast enough to be firefighters, as the experience of other cities shows. And the women of New York City are just as strong and brave as women anywhere,” she said. “Today the FDNY employs only 44 women as firefighters, less than half of one percent of its firefighting force, while other major cities pull ahead with numbers as high as 15 percent.” Women are also dramatically underrepresented at the FDNY as dispatchers, budget and finance personnel, administrators, lawyers, and EMTs. Legal Momentum provides technical assistance to employers and advocacy for women in occupations from which women historically have been excluded and has represented women firefighters in employment discrimination suits nationwide.

National and Local Legislation Is Needed to Advance Equality for Women

Legal Momentum will continue to work with the new Congress next year on pregnancy rights, workplace protections for survivors of domestic and sexual assault, and Title IX. We are already in dialogue with Hill staff about moving forward.

In New York City, we are calling on the Mayor to ban any timing requirement in the Functional Skills Testing of FDNY applicants because it is not based on evidence. The City Council should pass legislation doing the same, as well as pass Intro. No. 579 requiring the FDNY to report on the racial and gender makeup of firefighter examination applicants, eligible lists, academy admissions and graduation statistics—including reporting every reason why candidates did not complete the Academy, not only physical testing.