“It’s been life changing,” says Joanne Hager, an apprentices instructor at the Minnesota Labor Training Center in Minneapolis, Minnesota. Joanne joined the trades as an apprentice in 2008 at the age of 47. She became a journey worker in 2011. 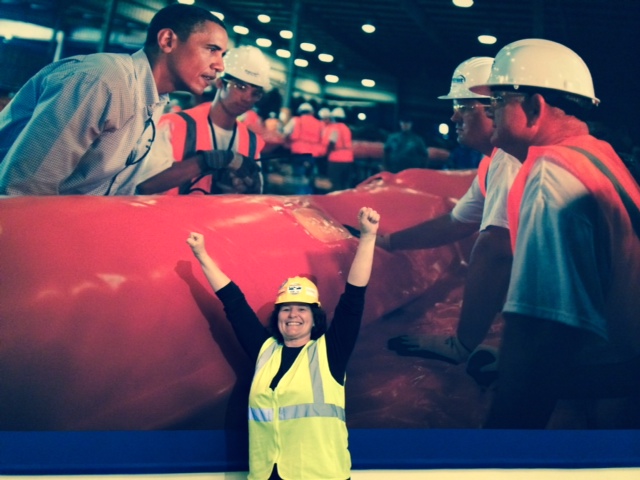 Prior to joining the trades, Joanne was working as a caregiver and didn’t know what her next step was going to be. One day, she was walking through downtown Minneapolis and saw a poster for Summit Academy with the words, “Who looks up to you?” After seeing this, she called Summit Academy and enrolled in their pre-apprenticeship carpentry program. Joanne was confident that her wage would be higher, enabling her to better support her family because the trades are a male-dominated job. Prior to working in the trades, Joanne made $10.18 an hour with no benefits as a caregiver; within three years of working in the trades she was making $30 an hour with benefits. In 2008, Joanne became an apprentice and immediately joined her local union. She is currently an Instructor of general construction for apprentices at the Minnesota Labor Training Center. Joanne was encouraged by her union to apply for this position after being out in the field for five years as a mason-tender.

When asked what she loves about her trade, Joanne said, “I love doing the physically demanding work all day. I feel so vital doing the work that I do. I know I cannot be replaced by a robot. I know I have job security as long as the economy is strong.” Joanne has always been a tomboy and known that the better-paying jobs are in the fields dominated by men. She was always drawn to those jobs, and finally as a tradeswomen has found a job that pays a living wage. She reflected that, “Everyone is paid the same in the building trades. They offer a great opportunity to have a career and support a family. Best, of all, they are equitable in the way that they pay their workers.”

Joanne’s appreciation for the way the trades transformed her life has led her to be very involved in her local union. She tries to always answer the call whenever participation is solicited. This involvement let her to be mentor to women who are in the ‘Hard Hats Too’ program at Summit Academy. She believes it is important to talk realistically about what women can expect in the field. Involvement in her union has also led to connections with other tradeswomen across the country that are extremely valuable to Joanne. Speaking of those connections she said, “It helps to know better what I can do to contribute to the better acceptance of tradeswomen across America.”

Joanne thinks it is important for tradeswomen to do their best to bring about the public policy issues they face in their union, and at all levels of government, saying, “It’s very important to encourage different municipalities to hire residents and women—we need a better balance of opportunities. We need to do more to encourage women to enter the trades, set higher hiring goals across the board and do more to promote the industry as a viable career option for women to pursue.” Joanne hopes the federal government will respond to all of the requests to revisit the hiring goals for women in the trades. She said that, “I hope this creates a huge opportunity for women to come into the trades and for unions to welcome these women in as they welcome in minorities. I hope we can be more reflective of the communities in which we work and live.” Because of the way the trades changed her life, Joanne wants other women to know working in the building and construction trades is a viable career option that they should strongly consider.