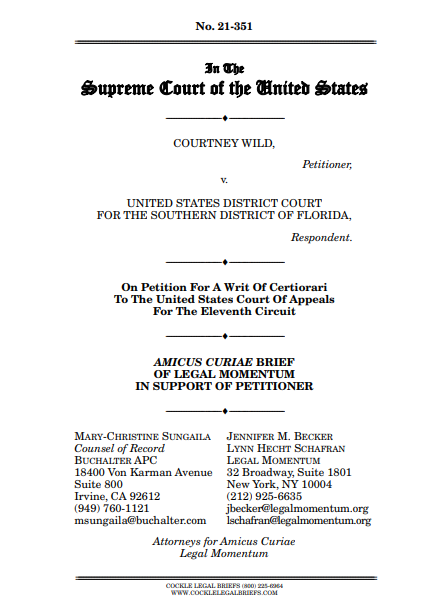 Last August a fifth Epstein victim, Courtney Wild, petitioned the U.S. Supreme Court to hear her case and decide whether the 2004 federal Crime Victims Rights Act (CVRA), a bill of rights for federal crime victims with specific enforcement provisions, contains rights-creating language that allows crime victims to sue to enforce their right to confer with prosecutors before the Government files a federal indictment.

Legal Momentum recently filed an amicus (friend-of-the-court) brief in support of Ms. Wild, who was lied to and denied her right to confer in the Florida Jeffrey Epstein case by the U.S. Attorney for the Southern District of Florida.

This is a case of national importance on which federal courts of appeal, district courts, the Department of Justice, and academia are split. For a myriad of reasons, it is important that the Supreme Court takes this case and clarifies the rights of victims and the obligations of prosecutors to consult them under the CVRA.

Ms. Wild’s petition is the result of the 2008 Florida case against Jeffrey Epstein. Despite evidence of Epstein’s extensive sex trafficking of underage girls, the U.S. Attorney for the Southern District of Florida agreed to the secret non-prosecution agreement proposed by Epstein’s high-profile defense team. The agreement allowed Epstein to plead to a state charge of procuring for prostitution a girl below age 18, which shut down the federal case. (The 2019 federal case in which Epstein was indicted for sex trafficking in New York was based on an entirely separate investigation.)

Ms. Wild has testified that she was 14 years old when Epstein first sexually abused her.  Subsequently she learned that she was one of more than 30 victims the U.S. Attorney interviewed in connection with his Epstein investigation. Then she learned that during the more than eight months the U.S. Attorney was sending her and the other victims boilerplate notices claiming that he was pursuing the Epstein investigation, he had already negotiated the secret non-prosecution deal with Epstein’s high profile defense team.

Because Ms. Wild was denied her CVRA right to confer, she is asking the Supreme Court to undo the secret non-prosecution agreement made in 2007 that shielded not only Epstein but co-conspirators who participated in abusing her and others. In cases such as this, and those of Harvey Weinstein and Bill Cosby, the ability to hold enablers accountable is essential.

This case has dragged on for more than thirteen years, through a federal district court, a three-judge panel of the 11th Circuit Court of Appeals, and an en banc hearing by all the judges of the 11th Circuit.  The decisions have been fractured, with sharp dissents. Legal Momentum's brief in support of Ms. Wild's petition focuses the Court on the sharply divided opinions on this important legal question, both in the decisions underlying Ms. Wild's case and in other cases.

Our brief also seeks to educate the Court on the realities of sex trafficking victimization and the obstacles that too often stand in the way of victim participation in the criminal justice system, not least of which are the explicit and implicit biases held by many justice system officials. Without an interpretation of the CVRA that gives victims a voice before the filing of an indictment, prosecutors are incentivized to dispose of cases pre-charging with no input from those affected. It is impossible to know how many victims have been shut out of having their voices heard in this way. Ms. Wild only came to be aware that she had been denied her right to confer because of Jeffrey Epstein’s high-profile status and the persistent investigative journalism that exposed him.

Ms. Wild is represented by one of the country’s pre-eminent authorities on the CVRA, law professor and former federal judge Paul Cassell, with whom Legal Momentum has worked on several victims’ rights cases. Legal Momentum’s amicus brief in this case was drafted with prominent appellate counsel Mary Christine Sungaila of the Buchalter firm, with whom we have worked for over thirty years.