Legal Momentum and pro bono partner Boies Schiller Flexner have filed an amended complaint in our lawsuit against Backpage.com in the state of Florida. Two new anonymous plaintiffs, a trafficking survivor who was only 15 at the time she was advertised on Backpage, and her mother, have joined the suit, which was originally filed in February 2017. The original plaintiffs when the suit was first filed were a trafficking survivor and Florida Abolitionist, an anti-trafficking organization that provides services to trafficking victims. Backpage has tried to stop the lawsuit, however, the judge has twice ordered that it proceed.

Since the original complaint was filed, Legal Momentum has helped to pass the historic FOSTA-SESTA federal anti-trafficking law. The new law allows victims to sue websites that support trafficking for damages. Federal authorities have shut down the Backpage website and indicted the company’s top executives, who are also defendants in Legal Momentum’s civil suit. Testimony by experts before a U.S. Senate subcommittee about Backpage said the site has handled up to 70 percent of sex trafficking in the U.S. The new developments in <strong">Legal Momentum’s lawsuit were covered in a May 1 story in the Orlando Sentinel.

Legal Momentum has been awarded a $5,000 Girls IGNITE! Grant from the New York Women’s Foundation to extend the Rights Now! Peer Educator Empowerment Program. Girls IGNITE! Grantmaking (GIG) is designed to empower girls, young women and gender-fluid youth to actively participate in philanthropic education and giving. With guidance from the New York Women’s Foundation staff, the GIG Fellows review proposals, conduct site visits, and create recommendations for funding. The GIG fellows interviewed <strong">Legal Momentum staff members and Peer Educator Shanifa Bennett. After reviewing our proposal and conducting a site visit, GIG selected Rights Now! as one of the 2018 grantees with a $5,000 grant. Rights now is a peer educator empowerment program that trains young women of color to identify and respond to sexual violence and sex-based discrimination through interactive workshops. 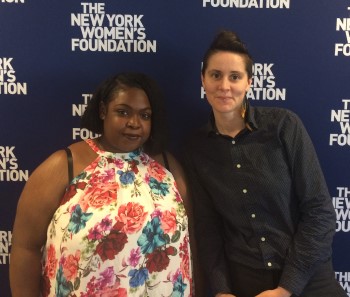 Legal Momentum was invited to attend the Girls IGNITE! Grantmaking Final Expo hosted by the Foundation, where the GIG Fellows were recognized.

Rights Now! Peer Educators Shanifa and Christina, and Rights Now! Policy Fellow Ane Mathieson, facilitated a workshop on healthy relationships and teen dating violence with Collegiate Express on May 9. Collegiate Express is a college-readiness program for low and moderate-income 9th grade students in Brooklyn. Its primary goal is for every child to attend and succeed in college. Eight young women attended the workshop. The youths engaged in heartfelt and sincere conversations about their expectations for healthy relationships. They thoughtfully challenged one another as they considered various scenarios from the lens of coercion and consent. Though initially unfamiliar with the word “coercion,” by the end of the workshop every youth could confidently assess a social situation and determine whether it was coercive or consensual.

Financial news personality Scarlet Fu, co-anchor of “Bloomberg Markets” and “What’d You Miss?” on Bloomberg, will be the emcee for this year’s Aiming High Awards Luncheon on June 7.  Ms. Fu also hosts “Bloomberg ETF IQ,” the first program to focus solely on exchange-traded products, and moderates the monthly CornellTech@Bloomberg speaker series with tech luminaries and entrepreneurs. We are delighted to have her as emcee for our 18th Annual Aiming High Awards Luncheon next week.

A May 30 story on NBCnews.com quoted Legal Momentum’s Deputy Legal Director and Senior Attorney Jennifer Becker on the indictment of Hollywood mogul Harvey Weinstein by a New York grand jury. Read the full article at Harvey Weinstein Will Not Testify Before New York Grand Jury.