The landmark, bipartisan Violence Against Women Act (VAWA), first passed in 1994, expires on September 30 and requires reauthorization by Congress. Representative Sheila Jackson Lee (D-TX), introduced the Reauthorization of the Violence Against Women Act of 2018 in the House on July 26. Legal Momentum was deeply involved in crafting this bill and urges all its supporters to contact their Congressional representatives and ask them to vote to support it.

We especially encourage everyone with Republican representatives to urge their member of Congress to sign on as a co-sponsor of the bill. VAWA has historically been bipartisan legislation and, according to the National Task Force to End Sexual and Domestic Violence (NTF), it has provided life-saving assistance to hundreds of thousands of women and men since it was first passed 24 years ago. VAWA dramatically improved the way that law enforcement and courts respond to domestic violence, dating violence, sexual assault, and stalking. Since its passage in 1994, reporting of domestic violence has increased as much as 51%, all states have passed laws making stalking a crime, and have strengthened their rape laws. The number of people killed by an intimate partner has decreased by 34% for women and 57% for men. VAWA continues to have an important impact in local communities throughout the country. Local advocacy is critically important to ensuring that VAWA is reauthorized with key improvements that will enhance essential prevention and intervention services for women, men and children who are victims of gender-based violence. Show your support on social media with hashtags #VAWA4ALL and #VAWA18.

On Friday, July 20, Legal Momentum launched a new web course,Helping Sexual Assault Victims Navigate the Criminal Justice System. The course was designed to demystify the criminal justice system for victim advocates and empower them to assist their clients more effectively. It was developed by Legal Momentum over the past two years with funding from the federal Office on Violence against Women (OVW).

For sexual assault victims, navigating the criminal justice system can be traumatic. Victim advocates can play a significant role in helping victims navigate the system and helping ensure that it functions with fairness and respect for all involved. But for many non-lawyer victim advocates, the criminal justice system and how they fit into it is a confusing maze. The web course is designed for non-lawyer victim advocates in order to better prepare them to help their clients navigate the criminal justice process. Topics covered include making the decision to report, victim’s rights, medical forensic sexual assault examinations, how civil systems—including campus systems—interact with the criminal case, and more. The 12-module course is open to all, free of charge, and can be accessed on demand at www.lm-vatraining.org. A recorded webinar introducing the web course is also available on Legal Momentum’s website and on Legal Momentum’s YouTube channel. 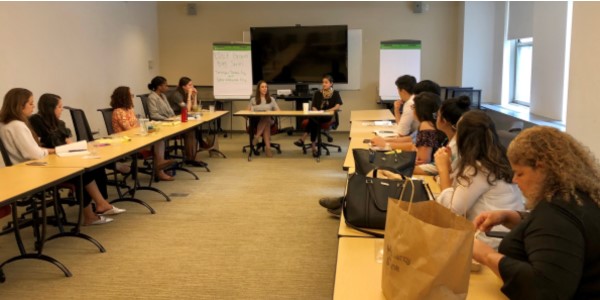 Legal Momentum’s program focused on the #MeToo movement, sexual harassment, and gender-based violence. Legal Momentum Deputy Legal Director and Senior Attorney Jennifer Becker and Gender Justice Fellow Seher Khawaja discussed the work it is currently doing to combat these problems. From the women who call our Helpline about sexual harassment and gender-based violence, Legal Momentum has learned that these problems can be incredibly isolating for women. The #MeToo movement is providing a global platform that shows victims that they’re not alone. It has empowered women to come forward and share their stories and brought visibility to the fact that our current legal framework is insufficient, antiquated, and can be a barrier. It has also compelled legislative action.