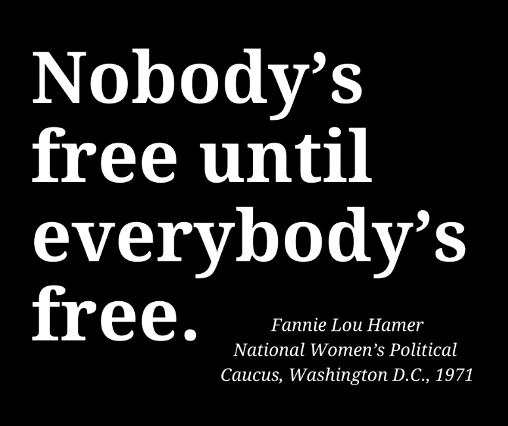 As the nation grieves the senseless killing of George Floyd and protests the grave injustice that resulted in his death, we are once again reminded that we cannot return to the status quo.

Martin Luther King Jr. proclaimed that a “riot is the language of the unheard.” As civil unrest around the world brings renewed visibility and a powerful voice to the longstanding scourge of racial injustice, we must continue to harness the power of the law to challenge and eliminate what President Obama rightly referred to as the “maddening normalcy of racism.”

The great civil rights leader Fannie Lou Hamer said “nobody’s free until everybody’s free” in a speech at the National Women’s Political Caucus in Washington D.C. in 1971. Her words serve as a critical reminder that our work to advance gender equality is inextricably linked to the work of many other justice movements. It is a reminder that without racial equality, there is no gender equality.

Today, and every day, we stand with the movement for black lives, we denounce state-sanctioned violence against black bodies, and we mourn with the families of Breonna Taylor, Tony McDade, George Floyd, Ahmaud Arbery, Eric Garner, and many others who have been unjustly taken from us.

Today, and every day, we stand for equality.