On April 22, the New York City Bar Association presented a panel on “The New Slavery: The International Trafficking in Women and Girls,” sponsored by the Committee on the UN and the Council on International Affairs. Penny Venetis, Legal Momentum’s Executive Vice President and Legal Director, spoke on the panel, which examined the global reach of trafficking as a crime and human rights violation. She highlighted Legal Momentum’s innovative work using principles of domestic and international law to stop traffickers from preying on vulnerable girls. Legal Momentum has been at the forefront of developing legal strategies to fight trafficking in meaningful and innovative ways.

Human trafficking is the fastest-growing and second-largest criminal industry in the world today. It is estimated that more than 20 million people have been trafficked for commercial sex or forced labor worldwide, and cases of human trafficking have been reported in all 50 states. Eighty-five percent of sex trafficking victims are women.

Dorchen Leidholdt, Director of Sanctuary for Families Legal Center and Co-Director of the New York State Anti-Trafficking Coalition, moderated the panel. Co-panelists were Judge Pamela K. Chen, U.S. District Court for the Eastern District of NY, and Taina Bien-Aime, Executive Director of the Coalition Against Trafficking in Women.

The American Bar Association Commission on Domestic and Sexual Violence will give its 2015 “20/20 Vision Award” to three current and former Legal Momentum attorneys for their work spanning 20 years leading powerful movements to pass the Violence Against Women Act (VAWA). VAWA radically changed the justice system’s response to victims of domestic and sexual violence. Legal Momentum’s Lisalyn Jacobs, Vice President for Government Relations, and two former Staff Attorneys, Sally Goldfarb and Julie Goldscheid, are among the 20 trailblazers who were instrumental in mobilizing the legal profession against domestic and sexual violence.

Julie Goldscheid, now Professor of Law at CUNY School of Law, was Senior Staff Attorney and Acting Legal Director at Legal Momentum in the late 1990s. Her work at Legal Momentum included defending the constitutionality of VAWA’s civil rights remedy (the ability of victims to sue their attackers) in courts nationwide, and before the U.S. Supreme Court in United States. v. Morrison. Unfortunately, the civil rights remedy that had been so vigorously fought for was struck down in that decision.

From inside the Department of Justice and as an advocate with Legal Momentum, Lisalyn Jacobs’ work has been crucial to the successful implementation and reauthorization of VAWA. She has drawn attention to the issues that affect the most marginalized and underserved victims of violence—Native American, immigrant, and poor women of color. Lisalyn is a member of the National Task Force to End Sexual and Domestic Violence (NTF) Steering Committee, and chairs the subcommittees on economic and criminal justice issues.

As a Legal Momentum Staff Attorney in the 1990s, Sally Goldfarb worked closely with then-Senator Joe Biden to develop and draft the bill that became VAWA. To build grassroots support for its passage, Sally founded and chaired a coalition of leading public interest groups, the National Task Force on the Violence Against Women Act. This task force later became NTF. Sally is now a Professor of Law at Rutgers School of Law-Camden. 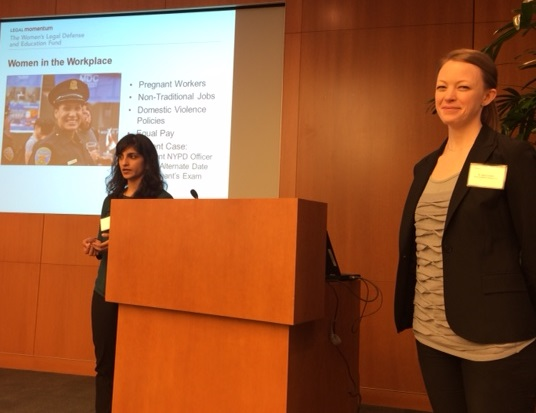 On March 26, emerging leaders gathered at the New York office of Weil, Gotschal and Manges LLP to kick off Legal Momentum’s new President’s Advisory Council. The Council brings together the next generation of feminists to create solutions for achieving social, political, and economic equality for women in the United States. Members are a diverse mix of women including students, lawyers, and government and nonprofit executives, who will hone their leadership skills and provide mutual support and mentorship. The Council is co-chaired by Jane Cooper, an associate at Weil, Gotshal, and Manges, and Nachel Mathoda, a senior analyst at Sullivan. Jane said “It was a wonderful opportunity to meet many driven individuals who will energize our Advisory Council and spread the word about how Legal Momentum is leading the fight for women’s rights.” Legal Momentum’s President and CEO Carol Robles-Román spoke briefly about its current work. Jessica Neuwirth, founder and current honorary president of Equality Now, president of the ERA Coalition, and author of Equal Means Equal: Why the Time for an Equal Rights Amendment Is Now, was guest speaker. To find out how you can join the Council, email friends@legalmomentum.org.

It’s not too late to register for Legal Momentum’s 15th Annual Aiming High Awards luncheon, which will take place at The Plaza in New York on Wednesday, May 6, 2015, from 11:30 AM to 2 PM. The Aiming High Awards will honor four highly accomplished women who have had the courage to aim high and excel in their professions. The 2015 honorees are:

The annual luncheon celebrating the power of women has become known as an exceptional networking opportunity. For sponsorship information or to reserve your place, please visit www.legalmomentum.org/aim-high, email friends@legalmomentum.org, or call 212-925-6635, ext. 155 or 169.

Two prominent executives have joined Legal Momentum’s Board of Directors. Patricia K. Gillette is a partner at Orrick, Herrington & Sutcliffe LLP in San Francisco, where she specializes in employment law. Patricia has been actively involved in national projects focusing on the retention of women in the legal industry and frequently writes and speaks on this topic. She is the co-founder of the Opt-In Project, a nationwide initiative focused on increasing the retention and advancement of women in law firms. She served for three years as a Commissioner on the ABA Commission for Women in the Profession, she co-chairs the San Francisco Bar Association's No Glass Ceiling Initiative, she served on the board of the National Association of Women Lawyers, and she is a member of the ABA's Gender Equity Task Force.

Ethan Cohen-Cole, Ph.D., is Managing Director at Econ One Research, a firm of economic experts with experience in both litigation and consulting across a wide range of practice areas. Ethan is an expert in banking, financial regulation, consumer credit, structured finance, financial markets, econometric methods, capital markets, analysis of networks, and systemic risk. A former finance professor, he has experience in financial services, litigation consulting and bank supervision, including with the Federal Reserve System as a bank regulator. Ethan has a deep commitment to social justice and human rights.

On April 23, the Senate voted to confirm Loretta Lynch as the first African-American woman to hold the post of U.S. Attorney General. Ms. Lynch waited longer for confirmation by the Senate than any nominee for U.S. Attorney General since the 1980s. Her confirmation was tied to a political fight related to language in a bill aimed at combating human trafficking. Legal Momentum has been working with organizations around the country to advocate on her behalf and wrote to Senate Judiciary Committee leaders. A feature article in The Guardian quoted Legal Momentum President and CEO Carol Robles-Román at length. When Carol was Deputy Mayor and Counsel to New York City Mayor Michael Bloomberg, she worked closely with Ms. Lynch’s office on fighting human trafficking. “Somebody who has that vision, and that eye, to protect our most vulnerable, can protect us all. It is a fearlessness that we need in our Attorney General,” Carol said.

Legal Momentum, the National Center for Victims of Crime, and more than 20 national victim and survivor organizations announced new shared policy priorities to help crime victims at a breakfast in Washington, D.C. for National Crime Victims’ Rights Week, April 19-25. Legal Momentum’s Vice President for Government Affairs, Lisalyn Jacobs, worked with the group of advocates that developed the priorities. The six priorities are to:

Legal Momentum and our partners invite others at the national, state, tribal, and local levels to read the report and sign on at www.victimsofcrime.org.

This Workplace Is a DV-Free Zone Webinar

Legal Momentum introduced its This Workplace Is a DV-Free Zone model policy on domestic and sexual violence and the workplace with a well-attended and highly informative webinar on April 17. More than 50 victim services providers, employers, and legal professionals attended. Legal Momentum Staff Attorney Jelena Kolic was the presenter. The presentation covered why it is important for employers to have an effective policy, the key ingredients of an effective policy, and the ways the model policy can be implemented. All those who filled out an evaluation rated the webinar “Excellent” or “Very good” and 83 percent of survey respondents indicated they plan to download Legal Momentum’s “Bill of Rights” poster and display it prominently in their workplace. A recorded version of the webinar is available on Legal Momentum’s website and YouTube channel. For information on the model policy and Bill of Rights, email info@legalmomentum.org.

A new exhibition titled Until Safety Is Guaranteed: Women and the Fight against Violence showcases the work of Legal Momentum (then known as the NOW Legal Defense and Education Fund) in drafting and passing the landmark Violence Against Women Act in the 1990s, and its 2000, 2005, and 2013 reauthorizations, as well as Legal Momentum’s award-winning National Judicial Education Program, which has been educating judges and other court personnel about gender violence and gender discrimination since 1980.

The exhibition chronicles the struggles and successes of the movement to end violence against women, using printed material from the 19th and 20th centuries to show that gender violence has long been a problem in our society. It documents personal stories of violence and survival and the emergence of activism and laws to protect women against violence. The materials displayed show efforts to educate the public and to protect women through the legal and legislative achievements of the late 20th and early 21st centuries. The exhibition runs from April 6 through August 14, 2015, at the Schlesinger Library of the Radcliffe Institute for Advanced Study at Harvard University. The Library is the repository for Legal Momentum’s historical files; the exhibition uses some of this material to highlight Legal Momentum’s achievements.

Having led the effort that urged the U.S. Supreme Court to take Peggy Young’s case against UPS, Legal Momentum is pleased that the Supreme Court’s decision, released on March 25, 2015, upheld some of the key provisions of the Pregnancy Discrimination Act (PDA). The decision made clear that federal law mandates employers to accommodate pregnant women on the same terms as everyone else. Legal Momentum has argued in courts in support of Ms. Young since 2012. Legal Momentum filed an amicus brief in the U.S. Court of Appeals for the Fourth Circuit and a second brief in support of Young’s efforts to persuade the Supreme Court to take her case, as well as a Supreme Court amicus brief.

The case arose when UPS forced Peggy Young, an airmail delivery driver, to take an unpaid leave of absence from her job because of a pregnancy-related lifting restriction. UPS remained unwilling to accommodate Peggy, even though its policy already provided for light-duty accommodations in cases of employees in many other situations—including the loss of a driver's license due to drunk driving! The district court ruled against Young; the Fourth Circuit upheld that ruling, holding that UPS's policy was pregnancy-blind and therefore not in violation of the PDA. The U.S. Supreme Court reversed, finding that if an employer accommodates other workers, it must also accommodate pregnant workers.

The decision, however, underscores the continued need for a federal Pregnant Workers Fairness Act. To show that she was entitled to an accommodation, Peggy will need to demonstrate that UPS’s decision to exclude pregnancy from its accommodation policies was unjustified. And while Peggy is well-equipped to do so, many pregnant women who find themselves in her position in the future might not be. Only Congressional action can ensure that all women nationwide are protected from workplace discrimination when they are pregnant.